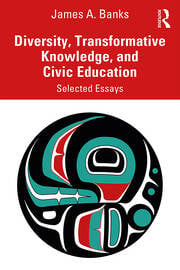 The essays collected in this book, by James A. Banks, a foundational figure in the field of multicultural education, illuminate the interconnection between the author’s work on knowledge construction and civic education. In pieces both poignant and personal, Banks shares some of his most groundbreaking and innovative work. Diversity, Transformative Knowledge, and Civic Education aims to unpack the "citizenship-education dilemma," whereby education programs strive to teach students democratic ideals and values within social, economic, political, and educational contexts that contradict justice, equality, and human rights. For change to take place, students need to internalize democratic values, by directly experiencing them in transformative classrooms and schools that are envisioned and described in this book.

Drawn from Banks’ formidable canon, this collection highlights the conceptual, curricular, and pedagogical issues related to this dilemma, and signals a fundamental shift toward transformative citizenship education. Students, scholars and educators in the fields of multicultural education, civic education, social studies education, comparative education, and the foundations of education will find this book to be a valuable resource for discussion and discovery.

2 The Historical Reconstruction of Knowledge About Race: Implications for

3The Lives and Values of Researchers: Implications for Educating Citizens in a

6 Diversity, Group Identity, and Citizenship Education in a Global Context

Selected Publications of James A. Banks

James A. Banks is the Kerry and Linda Killinger Endowed Chair in Diversity Studies Emeritus. He was the Founding Director of the Center for Multicultural Education at the University of Washington, Seattle, which is now the Banks Center for Educational Justice. Banks is a past president of the American Educational Research Association (AERA) and the National Council for the Social Studies (NCSS), a fellow of AERA, a member of the National Academy of Education, and a recipient of the Lifetime Achievement Award from the National Association for Multicultural Education (NAME).

"Once again James A. Banks brings clarity and coherence to the ongoing debate of who is a citizen. In an era of rapid migration and increasing nationalist sentiments, the idea of the citizen is more important than ever. Banks brings together powerful scholarship and insightful analysis in a timely and significant volume."

"James A. Banks has unquestionably been a transformative leader, scholar, and practitioner on how to create global democracies for a changing nation and world. This comprehensive compilation of his publications represents the breadth and depth of Banks’ work, which will influence our understanding of democracy, diversity, knowledge construction, and civic education for decades to come."

"In this engaging and informative collection of essays, James Banks describes how his personal biography of growing up in the segregated South has influenced his perspectives on the American saga and civic education. This timely book illuminates the importance of the current quests by marginalized groups around the world for full citizenship and sheds light on the heated and divisive debates that are taking place about citizenship and civic education."

"Spanning several decades and various disciplines, the powerful research and writings of James Banks’ long and illustrious career have helped define the fields of multicultural education, knowledge construction, and civic education in the United States and beyond. Reading this collection is like a history lesson of diversity and transformative education in the 20th and 21st centuries."

"This book is a remarkable journey through a half-century of transformative ideas in the field of multicultural education, citizenship, and identity by its most pivotal figure. It lays out the demand of an intellectual tradition that education ensure it provides the conditions for a pedagogy that is transformative so that every student from any country can become a culturally grounded and fully engaged citizen."

, Chair Professor in Sociology and Educational Policy, The University of Hong Kong

is urgently needed. At a time when many around the world question the viability of a stable multicultural democracy, James Banks builds a compelling set of arguments to show what is possible and needed. Based on nuanced analyses, he lays meticulous groundwork for the work public schools can do. This book should be in the hands of every social studies educator."

"During Banks’s long tenure at the University of Washington, he forged an extensive network of collaborators that provides testimony to both his academic stature and his generosity of spirit that one often does not find in prominent intellectuals… Although the explicit goal of this book is to provide an overview of Banks’s thinking on diversity and citizenship education, implicitly it also offers a portrait of the humanity and generosity of this man. As author and editor, he has applied his own prescriptions for inclusion by providing space for other scholars, male and female, of color or not, to participate in the creative act of writing for publication, with the goal of transforming schooling and society." –Margaret Smith Crocco, Schools, Volume 17, Number 2

"The book is much more needed now than ever before, particularly given the international spread of the ‘Black Lives Matter’ movement since early-2020.…[it] provides light and inspiration for those searching for dynamic balances between diversity and unity in changing contexts with changing needs, within and across cultures in the twenty-first century." –Wing-Wah Law, Multicultural Education Review