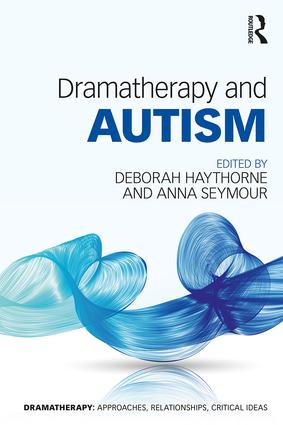 Using extensive examples from practice with a range of client groups, Dramatherapy and Autism confronts the assumption that people with autism are not able to function within the metaphorical realms of the imagination and creativity. It demonstrates that not only are people who function along the spectrum capable of engaging in creative exploration, but that through encountering these processes in the clinical context of dramatherapy, changes can be made that are life enhancing.

Bringing in cutting-edge research and practice on dramatherapy, Dramatherapy and Autism aims to contribute to developing the theory and practice of creative arts therapies interventions with clients with autism. The book is part of the Dramatherapy: approaches, relationships, critical ideas series, in which leading practitioners and researchers in the field develop the knowledge base of this unique discipline, whilst contextualising and acknowledging its relationship with other arts and therapeutic practices.

will be of interest to a broad spectrum of readers, such as dramatherapists in practice and training, arts practitioners and academic researchers engaged in multidisciplinary enquiry.

"As theater people we are intrigued by the many different roles and affects that encompass the human experience. As clinical practitioners, we are interested in guiding our clients toward a more empowered, inspired existence. Dramatherapy and Autism addresses important clinical issues of social emotional development, behavior management, gender, and personal growth for people on the autism spectrum. The numerous dramatherapy perspectives and practical approaches presented, including role, metaphor and story, are rich and informative!" - Dr. Lee R. Chasen RDT, LCAT, Author of Social Skills, Emotional Growth and Drama Therapy and Engaging Mirror Neurons in Children and Teens on the Autism Spectrum

"This is a significant book which serves not only as an excellent, clear and concise introduction to the field of dramatherapy but also champions its importance to an unknowing world. As a Head Teacher, I have found the work of dramatherapists to be one of the most valuable therapeutic inputs that pupils have received. In my setting there have been many profound and life enhancing developments for children with ASD and this is clearly reflected throughout the book. A must read for all practitioners working with children with ASD." - Havard Spring, Head Teacher of a primary school with a 42 place ASD provision

1 Introduction Anna Seymour and Deborah Haythorne 2 Dramatherapy and Autism Deborah Haythorne and Anna Seymour 3 Entering Colourland: Working with Metaphor with High Functioning Autistic Children Rosalind Davidson 4 Do you believe in Peter Pan? Helen Ridlington-White 5 Dramatherapy, autism and metaphor – meeting The Silky Stranger Jeannie Lewis 6 Supporting agency, choice making and the expression of voice with Kate: dramatherapy in a mainstream primary school setting with a nine-year-old girl diagnosed with ASD and ADHD Emma Ramsden 7 Becoming Visible: identifying and empowering girls on the autistic spectrum through dramatherapy Ann Dix 8 Introversion, Mindfulness and Dramatherapy: working with young people with autism Jeni Treves 9 Mother, Son and then Some: On Autism, Dramatic Reality and Relationship Maria Hodermarska 10 Being Men: Men, Asperger's and Dramatherapy Adrian Benbow 11 ‘Remember me’; Dramatherapy with adults who have autism, complex needs and are non-verbal Adrian Benbow and Jane Jackson 12 Assessing the Impact of Dramatherapy on the Early Social Behaviour of Young Children on the Autistic Spectrum Roya Dooman 13 An exploration of the impact of dramatherapy on the whole system supporting children and young people on the autistic spectrum Emma Godfrey and Deborah Haythorne

Deborah Haythorne is a founder and director of Roundabout, the largest dramatherapy charity in the UK. She is a trainer and supervisor for student dramatherapists, as well as experienced practitioners.

is Senior Lecturer in Dramatherapy at the University of Roehampton, London, Editor of Dramatherapy, Journal of the British Association of Dramatherapists and an international trainer.