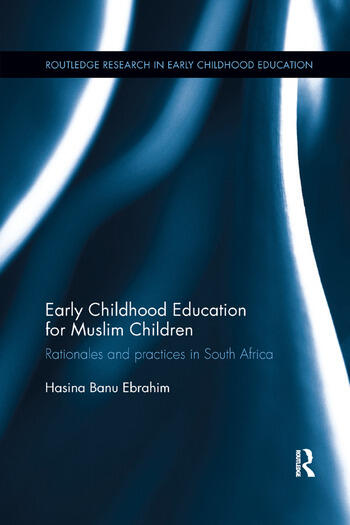 foregrounds the marginalised perspective of Muslim children aged three to five and examines how they are cared for and educated in centre-based provision in two provinces in post-apartheid South Africa. Both theological and social science perspectives are carefully interwoven to make sense of the construction of service provision for Muslims as a minority group in a secular democracy.

This book uses a qualitative, reflexive approach to amplify the voices of mothers, managers and teachers as the community of agents who shape priorities for young children in the context of a rapidly transforming society. The research demonstrates that the quest to establish an appropriate care network and a sound educative environment for Muslim children is riddled with complexities, struggles and tensions. In the light of changes in the home-based network for early education, centre-based provision has become an important infrastructure for Muslim communities seeking one-stop academic and Islamic education. The internal struggles encountered in this form of provision include inequities in access, struggles to package an appropriate curriculum, and dealing with nurturance specific to the faith and for cultural formations supportive of citizenship.

This book calls for critical engagement with issues of religious education in early childhood, social cohesion, formal systematic teacher education for Muslim teachers, curriculum development and parental support. It will contribute not only to the development of early education from an Islamic perspective, but will also demonstrate how to expand discourses and practices to deal with diversity and faith development in early years. As such, it will appeal to academics, researchers and postgraduate students in the fields of early childhood education, religious studies, race and ethnic studies, and childhood studies

Hasina Banu Ebrahim is a Professor in Early Childhood Education at the University of South Africa. She is a rated researcher with the National Research Foundation in South Africa and her research focus in on Early Care and Education policy, practice and teacher education.

Ebrahim’s book is a fascinating examination of how early childhood education is rationalised and practiced among Muslim minority groups in South Africa. In contrast to dominant western discourses of early childhood, Ebrahim’s inquiry stands out for its grounding in an Islamic worldview while drawing from other useful theoretical frameworks. Ebrahim's study focuses on early childhood education centre in the Muslim minority context in South Africa, but has implications for Muslim populations worldwide as they seek to develop the societal infrastructure and curriculum needed to nurture and educate young Muslim children in ways that are faith-based, socially relevant, and effective. Dr Sadaf Shallwani, Senior Officer for Learning and Evaluation, Firelight Foundation, USA

Hasina Ebrahim has produced a remarkable text.   Based on multidisciplinary approaches, and drawing on research in selected Early Childhood Development sites, this book provides a sustained focus on the  multiple factors that influence the way in which young children grow, develop and learn in a Muslim – centric educational context.  The book’s perspectives are important in that it represents a departure from dominant constructions of childhood. Ebrahim’s account succeeds in working against the negative publicity that Muslims are experiencing in contemporary times.
Distinguished Professor Aslam Fataar, Vice-Dean Research, Stellenbosch University, South Africa

This book makes compelling reading. For people seeking to understand the early childhood education of Muslim children from the Islamic and social science perspectives, this book is a must. It is the first on the subject. What you’ll learn from reading this book is that Muslim minorities face many challenges in preserving their identity in predominantly secularised societies. It shows how early childhood centres for Muslim children are serving as alternative educational institutions for faith development in the formative years.
Professor Suleman Dangor , University of KwaZulu-Natal, South Africa