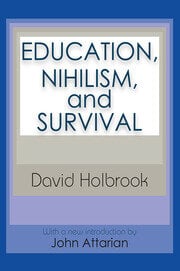 Under the influence of science, modern civilization has adopted the view that only things that can be verified empirically or arrived at rationally are true. Modern people tend to regard themselves as mechanisms, without any subjective aspects to their nature. In this insightful and passionately concerned book, British educationist and man of letters David Holbrook retorts persuasively that this reductive view of human nature is profoundly false. Man's inner, subjective life is essential to his nature, what happens to his consciousness is the most important thing in his life, and his greatest need is to find meaning.Holbrook also warns that reductionism has pernicious, even lethal, cultural, social, and political consequences. The logical result is nihilism: if human beings and existence are but physical mechanisms, it necessarily follows that consciousness does not exist, life is meaningless, our concern with moral values is pointless, and so are our lives and actions. Life itself reduces to nothing but self-indulgence and self-assertion. A culture informed by this perspective is necessarily full of expressions of hate and meaninglessness, which coarsens and demoralizes the majority of the population and worsens the mental pathologies of unstable persons. "Egoistical nihilism" becomes ever more widespread, and a decent society becomes impossible.Holbrook advances a keenly insightful and eloquent critique of the radical individualism of Max Stirner's famous tract The Ego and His Own. Stirner's worldview, he argues, is grounded in psychopathology and takes the nihilist assumptions of modernity to their logical conclusion: "the unique one" totally detached from society and reducing others to mere means to his ends, fair game for exploitation unfettered by ethical considerations. Ominously, he notes, the Stirnerean attitude toward existence is becoming increasingly common. Against the reductive perspective of positivism, Holbrook argues that scientific investigations establish the reality of meaning and of values rooted in love. He calls for a reaffirmation of both.Originally published in 1977, Education, Nihilism, and Survival speaks prophetically and even more urgently to us today. The worsening coarseness, nihilism, and brutality of our culture, the partisan fanaticisms and widespread alienation and apathy of our politics, and horrors such as school shootings reveal the consequences of radical individualism.Education, Nihilism, and Survival will be of interest to well-educated general readers concerned at the state of culture and society; educators alarmed at harmful approaches in education; and psychologists and philosophers concerned about existentialism, Stirner's egoist philosophy, and the need for meaningful, philosophical anthropology.