Education and the Labour Government
An Evaluation of Two Terms 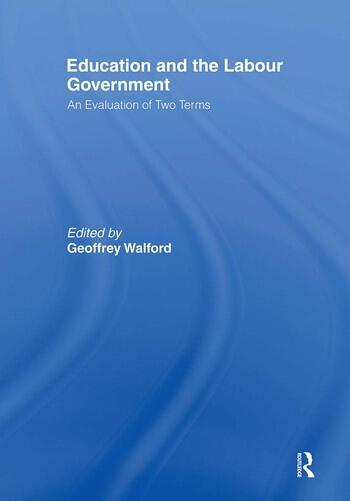 Education and the Labour Government: An Evaluation of Two Terms

This book presents a valuable and authoritative evaluation of the real impact Labour’s two terms have had on the British education system.

On the 1st May 1997 the British electorate witnessed a watershed moment. After an eighteen year Conservative rule, a New Labour government took office. When asked what his top three priorities were for the first term, Tony Blair stated that they would be ‘education, education, education.’ This book questions the extent to which the policy has met the rhetoric; examining Labour’s education policy, practice and achievements during Blair’s two terms in office.

This selection of writings by highly respected academics in this field charts and evaluates the effects of policy changes on the various sectors of the educational system and on the major indicators of inequality.

This book was previously published as a special issue of the Oxford Review of Education.

7. New Labour and teacher education: the end of an era, John Furlong