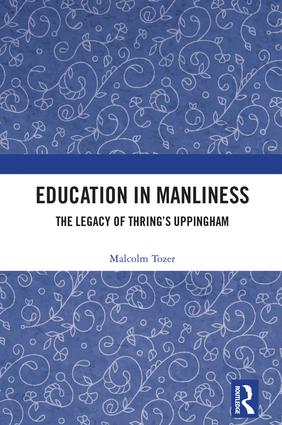 Education in Manliness explores the central educational ideal of the Victorian and Edwardian public school. The book traces the formulation of what Edward Thring, the most celebrated headmaster of the era, termed ‘true manliness’, noting the debt to the Platonic concept of the whole man and to Christian example, before examining the ideal’s best holistic practice at Uppingham and other mid-Victorian schools.

The central chapters follow the tilting of manliness to the physical by the muscular Christians in the 1860s, its distortion to Spartanism by the games masters and sporting dons from the 1870s, and its hijacking by the advocates of esprit de corps during the remainder of the century. The book lays bare the total perversion of the ideal by the military imperialists in the years up to the Great War, and traces the lifeline of holistic education through the progressive school movement from the 1880s to the 1970s. It then brings this up to date by comparing true manliness with the ‘wholeness’ ideal of schools of the new millennium.

This book will be of great interest to scholars and students in the fields of history of education and the theory and practice of teaching, as well as school and university teachers, teacher trainers and trainee teachers.

"Tozer's book provides a forceful critique of those both at Uppingham and at other major publich schools who perverted Thring's ideas. Tozer's book is lively, consistently interesting, and based on very extensive knowledge of the Boys' public schools and their history."

"This magnificent book needs to be in the reference section of all university libraries. It is truly a publication of great significance. Historians will find it illuminating and social scientists need to be aware of the research methodology."

"This book can be warmly welcomed as a more searching appraisal of Edward Thring than any previous account. There is an impressive depth of documentation, drawn from Thring’s diaries, as well as his better known sermons and published work. Tozer places Thring in the broadest possible frame. Detailed study of his headmastership is preceded by an analysis of the mentors past and present from whom he derived his educational ideas. The exceptionally long period of Thring’s tenure at Uppingham is studied in depth. The most original part of Tozer’s book is his tracing of Thring’s legacy long after his lifetime into the recent past."

"This important and far-ranging work is the fruit of 40 years’ experience and an immense amount of reading and research. (Tozer) deploys a wealth of original documents and his own prose carries the reader comfortably through this substantial book. It is easy to see why Thring is still so highly regarded."

Malcolm Tozer taught at Uppingham School from 1966 until 1989 and served as a housemaster for fourteen years. From 1989, he was Northamptonshire Grammar School’s first Headmaster for six years, and then Headmaster of Wellow House School for a further ten years.