Everyday Arab Identity
The Daily Reproduction of the Arab World 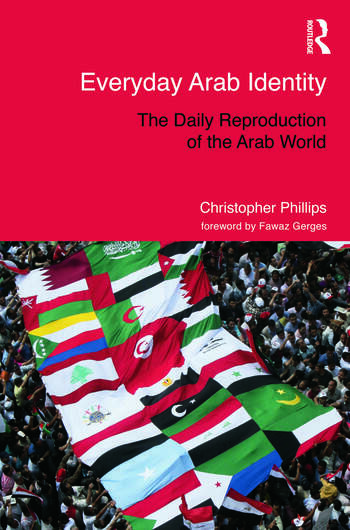 Everyday Arab Identity: The Daily Reproduction of the Arab World

Whether through government propaganda or popular transnational satellite television channels, Arab citizens encounter a discourse that reinforces a sense of belonging to their own state and a broader Arab world on a daily basis. Looking through the lens of nationalism theory, this book examines how and why Arab identity continues to be reproduced in today’s Middle East, and how that Arab identity interacts with strengthening ties to religion and the state.

Drawing on case studies of two ideologically different Arab regimes, Syria and Jordan, Christopher Phillips explores both the implications this everyday Arab identity will have on western policy towards the Middle East and its real life impact on international relations.

Offering an original perspective on this topical issue, this book will be of interest to academics and practitioners working on the Arab world and political affairs, as well as students of International Relations, Political Science and the Middle East, notably Syria and Jordan, and policymakers in the region.

Christopher Phillips is Lecturer in the International Relations of the Middle East at Queen Mary, University of London. He has lived in Syria for several years and was formerly Syria and Jordan specialist for the Economist Intelligence Unit. Everyday Arab Identity is his first book.

"Everyday Arab Identity will be of interest and utility to academics and practitioners whose work is devoted to the Middle East and the Arab world. It will also be very valuable for students of these disciplines and those interested in Syria and Jordan... Phillips’ main argument— that state identity and pan-Arab identity do not contradict each other and can be promoted in tandem—is both relevant and useful to the understanding of some of the “Arab Spring” dynamics... Phillips’ book sheds light on this “Arab” dimension, which remains a constant factor as well as a changing reality in the region. Following the death of Nasir and his pan-Arab vision, and now that the era of the Arab autocrats is drawing to a close, Phillips demonstrates that Arabisim is still alive and kicking, adjusting to new realities and happy to live along state nationalism that is not about to fade either."- Nir Boms, Tel Aviv University; The Israel Journal of Foreign Affairs, 2013.

"The book could not have come at any better time than this... The author deserves all praises for this study, coining new ideas to probe the ever intriguing theme of identity." - Moinuddin Ahmad, The New Statesman, Delhi, 2013.

"Everyday Arab Identity engages in and contributes to a number of debates and should be of interest to several audiences. One is obviously area specialists with a particular interest in (comparing) Syria and Jordan…The volume also deserves attention from those interested in the general debate about how Arabism may have been transformed rather than terminated...Everyday Arab Identity also deserves attention from those interested in "everyday nationalism" in the more general debate on nationalism...There is much on offer for a number of audiences in this innovative and valuable study, which also serves as an example of how cross-fertilization between Middle East studies and mere general theoretical debates can be productive for all parts." - Morten Valbjorn, Associate Professor, Department of Political Science and Government, Aarhus University, Denmark.

"This book originated as Phillips’s doctoral thesis at the London School of Economics, and it shows. At times, especially when dealing with the theoretical background, it is heavy-going. But the heaviness stems from the sheer weight of the subject-matter, rather than from a turgid style. In places, this book demands concentration, and it is worth the effort." - Alan George, University of Oxford, UK

"highly informative book worth reading from and are also food for thought for other projects to expand the current state of research."
Tonia Schüller, sehepunkte journal, sehepunkte 15 (2015), No. 10