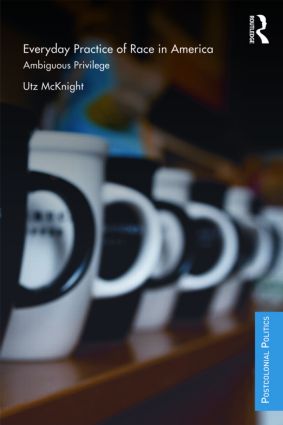 Everyday Practice of Race in America

An original contribution to political theory and cultural studies this work argues for a reinterpretation of how race is described in US society. McKnight develops a line of reasoning to explain how we accommodate racial categories in a period when it has become important to adopt anti-racist formal instruments in much of our daily lives.

The discussion ranges over a wide theoretical landscape, bringing to bear the insights of Wittgenstein, Stanley Cavell, Michel Foucault, Cornel West and others to the dilemmas represented by the continuing social practice of race. The book lays the theoretical foundation for a politics of critical race practice, it provides insight into why we have sought the legal and formal institutional solutions to racism that have developed since the 1960s, and then describes why these are inadequate to addressing the new practices of racism in society. The work seeks to leave the reader with a sense of possibility, not pessimism; and demonstrates how specific arguments about racial subjection may allow for changing how we live and thereby improve the impact race continues to have in our lives.

By developing a new way to critically study how race persists in dominating society, the book provides readers with an understanding of how race is socially constructed today, and will be of great interest to students and scholars of political theory, American politics and race & ethnic politics

"McKnight (Univ. of Alabama) presents a philosophical exploration of the contours of race and racism in US life with this interesting work….This complex work offers a clear challenge to theories of a post-racial US." —K. Anderson, Eastern Illinois University, Recommended title, CHOICE

1. Representation: Class Ambiguity and Racial Subjectivity 2. The Everyday and Ordinary: Developing a Theory of Race 3. Cody’s, Foucault, and Race 4. Working Together: Conditional Subjectivity 5. Walking the Streets 6. Passing and Mixing: Challenging the Racial Subject

‘Postcolonial Politics’ is a series that publishes books that lie at the intersection of politics and postcolonial theory. That point of intersection once barely existed; its recent emergence is enabled, first, because a new form of ‘politics’ is beginning to make its appearance. Intellectual concerns that began life as a (yet unnamed) set of theoretical interventions from scholars largely working within the ‘New Humanities’ have now begun to migrate into the realm of politics. The result is politics with a difference, with a concern for the everyday, the ephemeral, the serendipitous and the unworldly. Second, postcolonial theory has raised a new set of concerns in relation to understandings of the non-West. At first these concerns and these questions found their home in literary studies, but they were also, always, political. Edward Said’s binary of ‘Europe and its other’ introduced us to a ‘style of thought’ that was as much political as it was cultural as much about the politics of knowledge as the production of knowledge, and as much about life on the street as about a philosophy of being, A new, broader and more reflexive understanding of politics, and a new style of thinking about the non-Western world, make it possible to ‘think’ politics through postcolonial theory, and to ‘do’ postcolonial theory in a fashion which picks up on its political implications.

Postcolonial Politics attempts to pick up on these myriad trails and disruptive practices. The series aims to help us read culture politically, read ‘difference’ concretely, and to problematise our ideas of the modern, the rational and the scientific by working at the margins of a knowledge system that is still logocentric and Eurocentric. This is where a postcolonial politics hopes to offer new and fresh visions of both the postcolonial and the political.