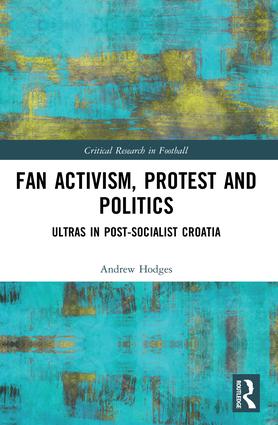 In what sense can organized football fans be understood as political actors or participants in social movements? How do fan struggles link to wider social and political transformations? And what methodological dilemmas arise when researching fan activism? Fan Activism, Protest and Politics seeks ethnographic answers to these questions in a context – Zagreb, Croatia – shaped by the recent Yugoslav wars, nation-state building, post-socialist ‘transition’ and EU accession.

This is important reading for students and researchers alike in the fields of football studies, regional studies of the former Yugoslavia and post-socialism, political sociology and social movements, and studies of masculinity, gender and sexuality. A useful resource for scholars writing about social movements and protest, or post-socialist subcultural scenes in south-east Europe, the book is also a fascinating read for policymakers interested in better understanding the contemporary (geo)political situation in the region.

5. Political Ideologies and the Fan Movement

Conclusion: The ‘New’ Europe in Crisis?

Andrew Hodges is a social anthropologist working at the Leibniz Institute for East and Southeast European Studies in Regensburg, Germany. His main research interests include the anthropology and sociology of football fandom, minority language activism, and the politics of knowledge production. He has written extensively about left and progressive fan initiatives in Zagreb, Croatia, and about Croatian minority activist networks in Serbia, analyzing them both as social movements.

The Critical Research in Football book series was launched in 2017 to showcase the inter- and multi-disciplinary breadth of debate relating to 'football'. The series defines 'football' as broader than association football, with research on rugby, Gaelic and gridiron codes also featured. Including monographs, edited collections, short books and textbooks, books in the series are written and/or edited by leading experts in the field whilst consciously also affording space to emerging voices in the area, and are designed to appeal to students, postgraduate students and scholars who are interested in the range of disciplines in which critical research in football connects. The series is published in association with the Football Collective, www.footballcollective.org.uk.