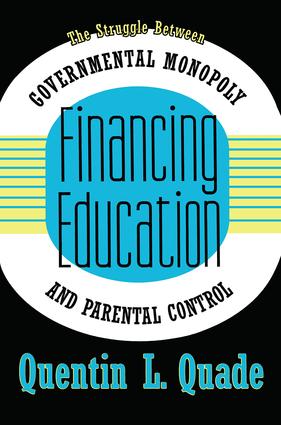 The Struggle between Governmental Monopoly and Parental Control, 1st Edition

Lack of family structure, violence in the schools, and overcrowded classrooms spur a never-ending cry for "reforms" to confront such issues. Quentin L. Quade cuts through the alarming din to what he feels is the real heart of the matter- the ways society assigns tax dollars dedicated to education, what he refers to as educational finance monopoly or EFM.

In the United States, contrary to the practice of many other modern democracies, tax dollars are assigned by state bureaucratic structures to each state's own schools. Such a system spawns structures and personnel that stay in place irrespective of merit, and keep control of all finances. An alternative to EFM, at work in various other democracies, is programs aimed to permit school choice without financial penalty. In such systems, parents determine the allocation of education-dedicated tax dollars, and can select schools most suited to their children. In contrast, under EFM state schools are sheltered from competitive incentives to excel, to make themselves choiceworthy. And independent schools are damaged because they are deprived of the resources they would have if parents were free to choose.

On the one side, defenders of EFM want political control for financial advantage and to block efforts to change. On the other side, critics want parents to be free to decide the educational environment for their children. Quade maintains that EFM is fundamentally injurious to children, parents, and the nation; that it is maintained by political defenses of financial interests, not for reasons of educational merit; and that school choice without financial penalty would create better educational conditions and outcomes.

Financing Education examines the major problems of American K-12 education, establishes the casual connections with EFM, offers school choice without financial penalty as a powerful and obvious cure, and examines several American school choice proposals. It will be of interest to policymakers, policy analysts, educators, taxpayers, parents, and all persons concerned about American's educational quality.