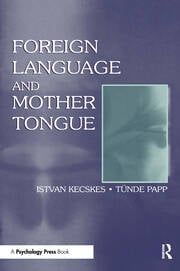 This is the first book that discusses the effect of foreign language learning on first language processing. The authors argue that multilingual development is a dynamic and cumulative process characterized by transfer of different nature, and results in a common underlying conceptual base with two or more language channels that constantly interact with each other.

Language representation and processing are discussed from a cognitive-pragmatic rather than a lexical-syntactic perspective. This required the review of several crucial issues of L2 acquisition, such as transfer, vocabulary development, conceptual fluency, and pragmatic skills. The authors also reviewed a large body of literature touching on cognitive psychology, linguistics, psycholinguistics, SLA, philosophy, and education in order to explain multilingual development and the positive effect of foreign language learning on the first language.

An important read for linguists and language educators alike, this volume:
* attempts to explain multilingual development from a cognitive-pragmatic perspective,
* argues that foreign language learning has a positive effect on the development and use of mother tongue skills,
* relies on research findings of several different disciplines,
* builds on the results of quantitative research conducted by the authors, and
touches on a wide range of literature.

"Foreign Language and Mother Tongue is a well-balanced book. It provides a strong theoretical framework for a relatively new research field in FLL....this is an interesting book for educators and researchers. It suggests new and serious issues about FL and SL teaching and learning. The issues that book raises should be taken into account in implementing FL programmes."
—TESL-EJ

"This well-written book draws on and contributes to the fields of psycholinguistics, theoretical linguistics, sociolinguistics, cognitive linguistics, bilingualism, and first and second language acquisition and would be of interest to those practicing in these disciplines. It provides much inspiration for future research within this particular theoretical framework. Kecskes and Papp's own research narrowly focused on the effects of L2 acquisition on L1 writing by learners in one particular age range in one particular lanuage-learning context, but the theory itself could and should be tested on other learners in different age groups and language-learning contexts with respect to other skills."
—SSLA

"...this volume describes in a very direct, challenging, and suggestive way the needs, and also the possibilities, of multilingualism, and offers illuminating practical ideas to tread the difficult path of L2 teaching....experiment connoisseurs will be delighted to consider a lot or background empirical evidence that accompanies the theories described in this volume. Kecskes and Papp help bridge the not easily reconcilable gap of psycholinguistic and pragmatic research."

"Important discoveries are often made in obvious places. In this book, Kecskes and Papp explore familiar territory--the relationship between first- and second-language acquisition--in the non-traditional direction, presenting convincing research on the very important aspect of dynamic multilingual development that flows between two or more languages through the Common Underlying Conceptual Base. They do this by supplementing conventional lexico-syntactic approaches with their own cognitive-pragmatic perspective, which demonstrates how language transfer contains not only forms and structures, but also functions and knowledge.

It takes exceptional objectivity and broad based knowledge to bring together the best aspects of divergent theories and mold them into a coherent new approach. Kecskes and Papp do exactly this, incorporating ideas from Humboldt, Vygotsky, Wierzbicka, G. Lakoff, Cummins, Kroll, Cook, Grosjean, Selinker, Gass, and many others, then adding their own considerable insights from pragmatics to produce a valuable unified contribution to applied linguistics and language learning.

"The relationships between language and thought, between bilingualism and cognition, and between one's first and second language have long been a focus of attention in the fields of linguistics, bilingualism, and second language acquisition. Prior research, however, has dealt mainly with the influence of one's first language background on the learning and use of subsequent languages. Istvan Kecskes and Tünde Papp have changed that, giving a completely new spin to the old story with their innovative study demonstrating the positive consequences of learning a foreign or second language on first language use. This book provides evidence supporting the theory of multicompetence, which posits that the first language knowledge of multilingual individuals differs from that of monolinguals. Moreover, it demonstrates that first language competence and language learning strategies are affected by either acquiring a second language in a naturalistic environment or learning it in the classroom as a foreign language. This is a highly original and very impressive book that should be of great interest to readers in a wide range of disciplines, particularly linguists, psychologists, SLA researchers and language educators. Its comprehensiveness and clarity also make it a great read for anyone who ever wondered what can be gained from learning a foreign language."