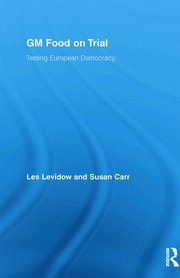 Europe was told that it had no choice but to accept agbiotech, yet this imperative was turned into a test of democratic accountability for societal choices.  Since the late 1990s, European public controversy has kept the agri-biotech industry and its promoters on the defensive. As some opponents and regulators alike have declared, ‘GM food/crops are on trial’. Suspicion of their guilt has been evoked by moral symbols, as disputes over whether genetically-modified products are modest benign improvements on traditional plant breeding, or dangerous Frankenfoods; and in disputes over whether they are global saviours, or control agents of multinational companies. This book examines European institutions being ‘put on trial’ for how their regulatory procedures evaluate and regulate GM products, in ways which opened up alternative futures. Levidow and Carr highlight how public controversy created a legitimacy crisis, leading to national policy changes and demands, in turn stimulating changes in EU agbiotech regulations as a strategy to regain legitimacy.

Les Levidow is on the faculty of the Development Policy and Practice department at The Open University.

Susan Carr is a Senior Lecturer in Systems at The Open University.

"GM Food on Trial offers an excellent window on the struggles that have raged around agricultural biotech in Europe, especially how a series of potentially beneficial products were turned into symbols of global threat. As a study of how GM food evolved as a metaphor for larger questions about democratic legitimacy, the book is an important read for anyone interested in the politics of genetically modified agriculture and the democratic deficit that it has revealed. The book concisely illustrates how these conflicts have put the public accountability of representative democracy itself on trial."
- Frank Fischer, Professor of Political Science, Rutgers University

"In a field that is of iconic importance, both for the ways we produce food and for the ways we choose technologies, GM Food on Trial casts some much-needed (and rarely-offered) light. It takes a broad governance perspective, viewing GM foods as a range of inherently social technologies in diverse ecological and institutional settings, with crucial attention to the roles played by political discourse and the exercise of power. Whatever our preconceptions, the effect is to significantly enhance our understanding."

"GM Food on Trial illustrates the extraordinarily complex twists and turns associated with the ongoing European debate over GM foods.  In particular, it shows how various trials – in science, in law, and in metaphorical tests of strength among various actors – have informed and transformed the debate, often in surprising ways.  Moreover, the book shows how those actors have also co-produced trials over the nature of democratic government.  As two long-time observers of ongoing transformations in the agri-food system, Levidow and Carr have shed new light on what is perhaps the central issue of the European Union: What forms shall European democracy take?"