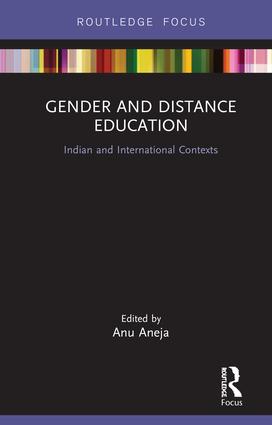 This book investigates the intersection of gender and distance education from a feminist perspective and explores their contemporary innovative interfaces in Indian and international contexts.

The key issues raised here include a re- investigation of the democratizing potential of distance education from a gendered perspective (especially in developing countries such as India), feminist pedagogical perspectives on the notion of transactional distance, the relationship between masculinity and gerontology from the perspective of non- traditional modes, and the interrelationships between gender and social media from a distance education perspective. As opposed to the conventional, physical classroom, the virtual classroom often occupies a de- privileged space in feminist pedagogical discussions, since it appears to align itself less easily with feminist praxes which encourage a free, intellectual exchange between teachers and students. By opening up various facets of the relationship between gender, distance education and feminist pedagogy, the book foregrounds the critical need to re- visit preconceived, unfavourable assumptions about this relationship and proposes mutually productive inter-linkages. It does so in the context of contemporary circumstances defined by the increasing use of virtual technology, the ongoing need for democratization of higher education and the constraints posed by consumerist trends.

Lucid and topical, this Focus volume will be useful to scholars and researchers of higher education, open and distance education, feminist pedagogy, gender studies, feminism, masculinity, and women’s studies as well as practitioners and policymakers working in the education sector.

Anu Aneja is Professor in the School of Gender and Development Studies at Indira Gandhi National Open University, New Delhi, India. She earned a Bachelor’s degree in French from Jawaharlal Nehru University and a doctorate in Comparative Literature from Pennsylvania State University. She taught for several years at Ohio Wesleyan University in the United States, where she was the recipient of the Rebecca Brown Professor of Literature award. She was also awarded the Beatrice B. Maines fellowship for research in women’s studies at the University of California, Berkeley. She has published in the areas of contemporary French, francophone and Indian literatures, feminine discourses, feminist perspectives on mothering, and feminist theory and pedagogy. Her most recent co- authored publication (with Shubhangi Vaidya) is Embodying Motherhood: Perspectives from Contemporary India (2016). She is currently editing a collection on women’s and gender studies in India.