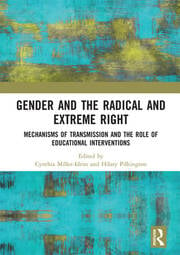 Gender and the Radical and Extreme Right: Mechanisms of Transmission and the Role of Educational Interventions


Gender and the Radical and Extreme Right

takes up an important and often-overlooked across scholarship on the radical right, gender, and education. These subfields have mostly operated independent of one another, and the scholars and practitioners who attend to educational interventions on the far right rarely address gender directly, while the growing body of scholarship on gender and the far right typically overlooks the issue of educational implications.

This edited volume steps into this space, bringing together seven chapters and an afterword to help readers rethink the educational implications of research on gender and the radical right. As a starting point for future dialogue and research across previously disparate subfields, this volume highlights education as one space where such an integration may be seen as a fruitful avenue for further exploration.

This book was originally published as a special issue of Gender and Education.

Introduction – In search of the missing link: gender, education and the radical right  1. Towards equality for women and men of one race: Sophie Rogge-Börner’s racial-feminist philosophy of education  2. The ‘obnoxious mobilised minority’: homophobia and homohysteria in the British national party, 1982–1999  3. Female leaders in a radical right movement: the Latvian National Front  4. Soldier, sailor, rebel, rule-breaker: masculinity and the body in the German far right  5. ‘Sexually modern nativist voters’: do they exist and do they vote for the populist radical right?  6. ‘EDL angels stand beside their men…not behind them’: the politics of gender and sexuality in an anti-Islam(ist) movement  7. Women and Golden Dawn: reproducing the nationalist habitus  Afterword: Next steps in the study of gender and education in the radical right

is Professor of Education and Sociology at American University, Washington, D.C., USA. She also directs the International Training and Education Program and runs the bi-annual Global Education Forum. Her research is focused on far right youth subcultures and on the organization and production of knowledge about the world within U.S. universities. She is the author of The Extreme Gone Mainstream: Commercialization and Far Right Youth Culture in Germany (2018) and Seeing the World: How Universities Make Knowledge in a Global Era (with Mitchell Stevens and Seteney Shami, 2018).

is Professor of Sociology at the University of Manchester, UK. She has a long-standing research interest in youth and youth cultural practices, post-socialist societies and qualitative, especially ethnographic, research methods. Her most recent books include Loud and Proud: Passion and Politics in the English Defence League (2016) and Understanding Youth Participation across Europe: From survey to ethnography (2017). She has been coordinator of several large, collaborative research projects, including the FP7 MYPLACE project and the H2020-EU funded project DARE (Dialogue About Radicalisation and Equality).