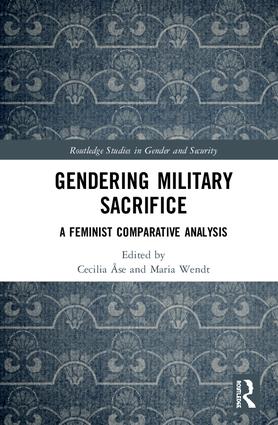 This book offers a feminist analysis of military sacrifice and reveals the importance of a gender perspective in understanding the idea of honourable death.

In present-day security discourses, traditional masculinised obligations to die for the homeland and its women and children are challenged and renegotiated. Working from a critical feminist perspective, this book examines the political and societal justifications for sacrifice in wars motivated by human rights and an international responsibility to protect. With original empirical research from six European countries, the volume demonstrates how gendered and nationalistic representations saturate contemporary notions of sacrifice and legitimate military violence. A key argument is that a gender perspective is necessary in order to understand, and to oppose, the idea of the honourable military death. Bringing together a wide range of materials – including public debates, rituals, monuments and artwork – to analyse the justifications for soldiers’ deaths in the Afghanistan war (2002–14), the analysis challenges methodological nationalism. The authors develop a feminist comparative methodology and engage in cross-country and transdisciplinary analysis. This innovative approach generates new understandings of the ways in which both the idealisation and the political contestation of military violence depend on gendered national narratives.

This book will be of much interest to students of gender studies, critical military studies, security studies and International Relations.

"Gendering Military Sacrifice provides rigorous and analytically rich insights into all the work that goes into making the death of soldiers politically intelligible and meaningful. Deftly weaving together practices of meaning making around military sacrifice, this volume has much to tell readers about the specific narratives and practices deployed in different European countries and how military sacrifice can be read as an increasingly globalised phenomenon."-- Victoria Basham, Cardiff University, UK

"This exciting volume offers original research regarding the meaning assigned to war deaths. The comparative analysis brings forth silences and absences within and across national divides in ways hardly ever done before, and opens windows to new understandings of contemporary war-making. For those among us looking for alternative voices in these times of war and threats of war, this book is an inspiration."-- Berit von der Lippe, Norwegian Business School, Norway

"Cecilia Åse, Maria Wendt and their smart co-authors have pulled back the curtain on the costs of the long Afghanistan war. They shine a feminist spotlight on the gendered rituals governments craft to justify their failed militarized policies."-- Cynthia Enloe, author of The Big Push: Exposing and Challenging Persistent Patriarchy

"There are studies on the military as a gendered institution, and there are studies on how societies commemorate their dead soldiers. This volume combines these perspectives in an original and very stimulating way. In analysing how ISAF casualties were commemorated and legitimated, the authors develop a concise and critical assessment of contemporary wars and national constructions of heroes, victims and sacrifices."-- Nina Leonhard, Bundeswehr Center of Military History and Social Sciences, Germany

6. Debating Deaths: The Possibility of Dissent in the Face of Military Sacrifice Hanne Martinek

is Associate Professor and Senior Lecturer in Political Science at Stockholm University, Sweden.

Routledge Studies in Gender and Security

The Routledge Studies in Gender and Security series looks to publish books at the intersection of gender studies, international relations, and Security Studies. It will publish a broad sampling of work in gender and security – from private military companies to world wars, from food insecurity to battlefield tactics, from large-n to deconstructive, and across different areas of the world. In addition to seeking a diverse sampling of substantive work in gender and security, the series seeks a diverse author pool – looking for cutting-edge junior scholars alongside more established authors, and authors from a wide variety of locations and across a spectrum of backgrounds.