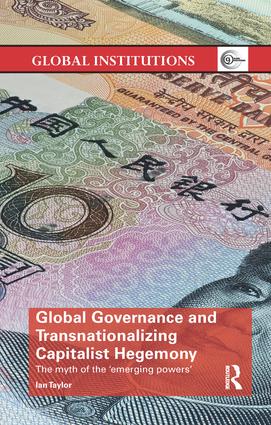 The Myth of the 'Emerging Powers', 1st Edition

This book is a critique of claims regarding how emerging economies are supposedly rewriting the rules of global governance and ushering in alternative models to neoliberal orthodoxy. It argues that such assumptions are abstractions that ignore both the transnationalizing nature of the global political economy and the actual policy goals of the ruling classes within most emerging economies.

Considering the larger issues behind the emerging economies (or powers) debate, the book deploys an adapted global capitalism perspective with insights from Gramsci, Poulantzas and Cox, to argue that the transnational nature of the global political economy and the actual policy goals of the dominant elites within most emerging economies merge to undermine any transformative element. Far from challenging the global order, these ostensible new rivals in fact seek to integrate their economies more and more within the existing liberal global economy. Inter-state dynamics and even inter-elite tensions exist and it is clear that the nation state has not simply become a transmission belt for global capital, but equally we must move beyond the surface phenomena that are most visible in global tensions to get at the underlying essence of social and class forces in the global political economy. Looking at the largest emerging powers, such as Brazil, Russia, India and China, Taylor explains why the emerging powers’ elites, although essentially subscribing to neoliberalism (in all its variegated forms) may confront the core in a myriad of ways, but that these are not challenges to the ongoing world order and, in fact, the so-called emerging powers serve a legitimizing function for the extant global system.

1 Neoliberalism’s triumph and the emerging powers