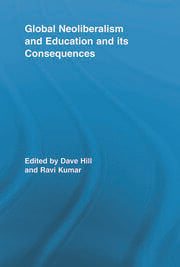 In this groundbreaking critique of neoliberalism in schooling and education, an international cast of education policy analysts, educational activists and scholars deftly analyze the ideologies underlying the global, national and local neoliberalisation of schooling and education.  The thrilling scholarship that makes up Global Neoliberalism and Education and its Consequences exposes the machinations, agenda and impacts of the privatising and 'merchandisation' of education by the World Bank, the General Agreement on Trade in Services (GATS), biased think tanks, global and national corporations and capital, and the full political spectrum of Neoliberal governments. Including such topics as the increasing polarization of  racialized and gendered social classes as a consequence of neoliberal policies, the role and shape of markets and education in the era of globalised Capitalism, the effects of the profit motive in higher education, the impact of the Heritage Foundation in the USA, and even a critical evaluation of education in Cuba--readers are sure to find startling insight and provocative arguments throughout Global Neoliberalism and Education and its Consequences.

Dave Hill teaches at University College Northampton, UK. For twenty years he was a political and labor union leader. He is Founder Editor of The Journal for Critical Education Policy Studies, www.jceps.com. He co-founded the Hillcole Group of Radical Left Educators with Mike Cole, in 1989. He is Director of the Institute for Education Policy Studies, www.ieps.org.uk. His most recent books, with Mike Cole, Peter McLaren and Glenn Rikowski, are Red Chalk: on Schooling, Capitalism and Politics (Brighton: Institute for Education Policy Studies, 2001) and Marxism Against Postmodernism in Educational Theory (Lexington Books, 2002). His forthcoming books include New Labour and Education: Policy, (In)Equality and Capital (Tufnell Press, 2006) and Charge of The Right Brigade: The Radical Right Restructuring of Schooling and Initial Teacher Education in England and Wales under The Conservative and New Labour Governments 1979-2005. Lampeter, Wales: Edwin Mellen Press (2006).

teaches sociology at the Department of Sociology, Jamia Millia Islamia University, New Delhi, India. He has experience of working with the students' movement and other grassroots movements in backward regions of India. He worked on "Dynamics of Identity Formation: The Political Economy of Backwards Castes in Bihar" for his doctorate, and has written over a dozen articles on education, communalism and politics. His publications include The Politics of Imperialism and Counterstrategies (co-edited, Delhi: Aakar Books, 2004); The Crisis of Elementary Education in India (edited, Sage, 2006). His specialization is social movements, identity politics, social theory and sociology of knowledge.