Governing Ethnic Conflict
Consociation, Identity and the Price of Peace 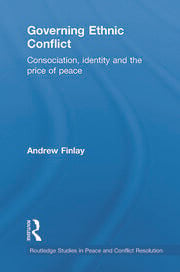 Governing Ethnic Conflict: Consociation, Identity and the Price of Peace

This book offers an intellectual history of an emerging technology of peace and explains how the liberal state has come to endorse illiberal subjects and practices.

The idea that conflicts are problems that have causes and therefore solutions rather than winners and losers has gained momentum since the end of the Cold War, and it has become more common for third party mediators acting in the name of liberal internationalism to promote the resolution of intra-state conflicts. These third-party peace makers appear to share lessons and expertise so that it is possible to speak of an emergent common technology of peace based around a controversial form of power-sharing known as consociation.

In this common technology of peace, the cause of conflict is understood to be competing ethno-national identities and the solution is to recognize these identities, and make them useful to government through power-sharing. Drawing on an analysis of the peace process in Ireland and the Dayton Accords in Bosnia Herzegovina, the book argues that the problem with consociational arrangements is not simply that they institutionalise ethnic division and privilege particular identities or groups, but, more importantly, that they close down the space for other ways of being. By specifying identity categories, consociational regimes create a residual, sink category, designated 'other'. These 'others' not only offer a challenge to prevailing ideas about identity but also stand in reproach to conventional wisdom regarding the management of conflict.

This book will be of much interest to students of conflict resolution, ethnic conflict, identity, and war and conflict studies in general.

Andrew Finlay is Lecturer in Sociology at Trinity College Dublin.

1. Introduction  2. Anthropology, Cultural Pluralism and Consociational Theory  3. Essentialism and the Reconciliation of the Liberal State to Ethnicity  4. Is Ethnopolitics a form of Biopolitics?  5. Consociationalism as a form of liberal governmentality: ‘single identity work’ versus community relations  6. Paradigm Shifts and the Production of ‘National Being’  7. No Exit: Human Rights and the Priority of Ethnicity  8. ‘A Long Way To Get Very Little’: the Durability of Identity, Socialist Politics and Communal Discipline  9. Conclusion

Andrew Finlay is Lecturer in Sociology at Trinity College, Dublin.

"Nowhere is the nexus between knowledge and power more starkly revealed than in conditions where, as the author rightly highlights, a line is drawn between the assumed ‘cause’ of conflict and its ‘solution’. Finlay usefully reveals the workings of this technology in a context that is not usually subjected to a Foucault-inspired analysis."