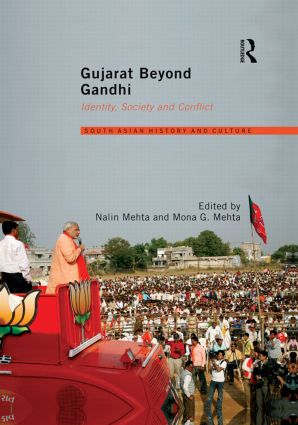 The birthplace of Mahatma Gandhi and the land that produced Mohammad Ali Jinnah, the founder of Pakistan, Gujarat has been at the centre-stage of South Asia’s political iconography for more than a century. As Gujarat, created as a separate state in 1960, celebrates its golden jubilee this collection of essays critically explores the many paradoxes and complexities of modernity and politics in the state. The contributors provide much-needed insights into the dominant impulses of identity formation, cultural change, political mobilisation, religious movements and modes of communication that define modern Gujarat.

This book touches upon a fascinating range of topics – the identity debates at the heart of the idea of modern Gujarat; the trajectory of Gujarati politics from the 1950s to the present day; bootlegging, the practice of corruption and public power; vegetarianism and violence; urban planning and the enabling infrastructure of antagonism; global diasporas and provincial politics – providing new insights into understanding the enigma of Gujarat. Going well beyond the boundaries of Gujarat and engaging with larger questions about democracy and diversity in India, this book will appeal to those interested in South Asian Studies, politics, sociology, history as well as the general reader.

This book was published as a special issue of South Asian History and Culture.

1. Gujarat beyond Gandhi: Notes on Identity, Conflict and Society Nalin Mehta and Mona G. Mehta 2. From Navnirman to the Anti-Mandal Riots: The Political Trajectory of Gujarat (1974–1985) Nagindas Sanghavi 3. Bootlegging, Politics and Corruption: State Violence and the Routine Practices of Public Power in Gujarat (1985–2002) Ornit Shani 4. A River of No Dissent: Narmada Movement and Coercive Gujarati Nativism Mona G. Mehta 5. Special Political Zone: Urban Planning, Spatial Segregation and the Infrastructure of Violence in Ahmedabad Arvind Rajagopal 6. On the Political Uses of Disgust in Gujarat Parvis Ghassem-Fachandi 7. Ashis Nandy vs. the State of Gujarat: Authoritarian Developmentalism, Democracy and the Politics of Narendra Modi Nalin Mehta 8. Soteriological Journeys and Discourses of Self-Transformation: The Tablighi Jamaat and Svadhyaya in Gujarat Anindita Chakrabarti 9. An ‘Imagined Community’ in Diaspora: Gujaratis in South Africa Goolam Vahed

Nalin Mehta is Joint Editor of South Asian History and Culture (Routledge) and Visiting Senior Fellow at the Asia Research institute and Institute of South Asian Studies, National University Singapore. His books include the award-winning India on Television: How Satellite News Channels Changed the Way We Think and Act (Asian Publishing Award 2009) and most recently he has co-authored the best-selling Sellotape Legacy: Delhi and the Commonwealth Games. Formerly Deputy News Editor and anchor at Times Now, as a journalist he has covered pivotal events in Gujarat for nearly a decade, including the earthquake of 2001, the 2002 riots and assembly elections in 2002 and 2007. He writes a weekly column for Mumbai Mirror and its sister publications.

Mona G. Mehta is Assistant Professor of Politics at Scripps College in Claremont, California, where she teaches politics of South Asia and comparative politics. Her research examines the processes by which a functioning democracy and a vibrant civil society have paradoxically become implicated in producing exclusion and Hindu-Muslim conflict in Gujarat. She has a Ph.D from the University of Chicago where she has taught courses in social science theory and identity politics in South Asia.

This books series offers a forum that will provide an integrated perspective on the field at large. It brings together research on South Asia in the humanities and social sciences, and provides scholars with a platform covering, but not restricted to, their particular fields of interest and specialization. Such an approach is critical to any expanding field of study, for the development of more informed and broader perspectives, and of more overarching theoretical conceptions.

The idea is to try to achieve a truly multidisciplinary forum for the study of South Asia under the aegis of which the established disciplines (e.g. history, politics, gender studies) and more recent fields (e.g. sport studies, sexuality studies) will enmesh with each other. A focus is also to make available to a broader readership new research on film, media, photography, medicine and the environment, which have to date remained more specialized fields of South Asian studies.

A significant concern for series is to focus across the whole of the region known as South Asia, and not simply on India, as most ‘South Asia' forums inevitably tend to do. The series is most conscious of this gap in South Asian studies and works to bring into focus more scholarship on and from Pakistan, Bangladesh, Sri Lanka, Nepal and other parts of South Asia.