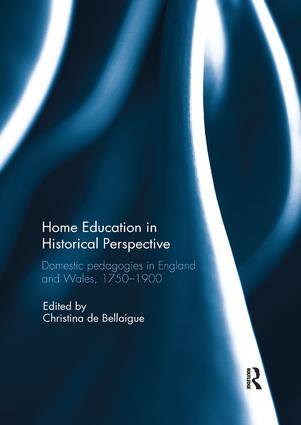 This book is the first publication to devote serious attention to the history of home education from the late eighteenth to the early twentieth century. It brings together work by historians, literary scholars and current practitioners who shed new light on the history of home-schooling in the UK both as a practice and as a philosophy. The six historical case studies point to the significance of domestic instruction in the past, and uncover the ways in which changing family forms have affected understandings of the purpose, form and content of education. At the same time, they uncover the ways in which families and individuals adapted to the expansion of formalised schooling. The final article - by philosopher and Elective Home Education practitioner and theorist Richard Davies - uncovers the ways in which the historical analysis can illuminate our understanding of contemporary education. As a whole, the volume offers stimulating insights into the history of learning in the home, and into the relationship between families and educational practice, that raise new questions about the objectives, form and content of education in the past and today. This book was originally published as a special issue of the Oxford Review of Education.

1. The home education of girls in the eighteenth-century novel: ‘the pernicious effects of an improper education’ Katie Halsey

2. The pedagogy of conversation in the home: ‘familiar conversation’ as a pedagogical tool in eighteenth and nineteenth-century England Michèle Cohen

4. Education in the working-class home: modes of learning as revealed by nineteenth-century criminal records Rosalind Crone

Christina de Bellaigue is Associate Professor in Modern History at Exeter College, University of Oxford, UK. She is the author of Educating women: schooling and identity in England and France, 1800-1867 (2007) and has published articles on the history of female education, comparative education, women and professionalization, and the history of reading. She is currently working on a comparative study of social mobility in nineteenth-century Britain and France, and on the history of the PNEU in the British Empire.