Identity in Adolescence 4e
The Balance between Self and Other 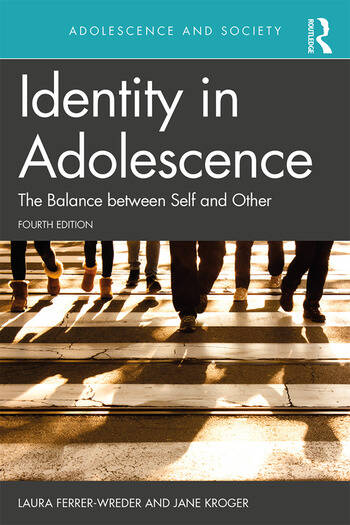 Identity in Adolescence 4e: The Balance between Self and Other

This fully revised fourth edition of Identity in Adolescence: The Balance Between Self and Other presents four theoretical perspectives on identity development during adolescence and young adulthood and their practical implications for intervention. Ferrer-Wreder and Kroger consider adolescent identity development as the unique intersection of social and cultural forces in combination with individual factors that each theoretical model stresses in attempting to understand the identity formation process for contemporary adolescents.

addresses the complex question of how adolescent identity forms and develops during adolescence and young adulthood and serves as the foundation for entering adult life. The book is unique in its presentation of four selected models that address this process, along with cutting-edge research and the implications that each of these models hold for practical interventions. This new edition has been comprehensively revised, with five completely new chapters and three that have been extensively updated. New special topics are also addressed, including ethnic, sexual, and gender identity development, the role of technology in adolescent identity development, and ongoing identity development beyond adolescence.

The book is essential reading for advanced undergraduate and graduate students studying adolescent development, self and social identity within developmental psychology, social psychology and clinical psychology, as well as practitioners in the fields of child welfare and mental health services, social work, youth and community work and counselling.

Preface to the fourth edition

Chapter 1: Adolescence and the problem of identity: Historical, sociocultural, and psychosocial views

Adolescent identity in the context of life span development

Identity as the balance between self and other

The structure of this volume and its chapters

The nature of ego identity

An optimal sense of identity

Identity as a stage in the life-cycle scheme

Criticism of the identity status construct

The nature of character formation

Criticism of Blos's construct and the second individuation process

Theoretical elaborations of the second individuation process of adolescence: Links with identity

The nature of narrative identity

Criticism of the three layer framework including narrative identity

Chapter 5: Identity as rooted in society and culture

The nature of culture and cultural identity

The nature of ethnic identity

The integrative model for ethnic and racial identity development

An optimal sense of ethnic identity

Criticism of the Integrative model of ethnic and racial identity development

The present-day salience of ethnic identity

Chapter 6: Intersectionality, and the confluence of gender and sexual identity

Chapter 7: The forging of a brave new virtual identity

Chapter 8: Identity beyond adolescence: What comes next?

Stability and change in identity beyond adolescence: Theory

Stability and change in identity beyond adolescence: Research

Adolescent identity resolutions and the psychosocial tasks of adulthood: Theory

Adolescent identity resolutions and the psychosocial tasks of adulthood: Research

Summary and conclusions: Identity as the balance between self and other

Laura Ferrer-Wreder, Ph.D., is a Docent (Associate Professor) in the Department of Psychology at Stockholm University. She has published widely and her current research focuses on advancing the study of positive youth development from a global perspective. She is one of the co-developers of an identity intervention called the Changing Lives Program.

Jane Kroger, Ph.D., is Professor Emerita of Developmental Psychology at University of Tromsø, Norway. Previous books include Identity Development: Adolescence through Adulthood and Discussions on Ego Identity, along with numerous research investigations on identity development during adolescence and adulthood.

To say that the fourth edition of Identity in Adolescence has been updated is an understatement. Although Ferrer-Wreder and Kroger have retained the coverage of seminal work by Erikson and Blos, the book has been expanded to include many new and exciting developments in adolescent and young adult identity research that emerged since the last edition. This new edition includes chapters on narrative studies, sociocultural approaches, intersections of gender and sexuality, and technology and virtual identity. At its heart, this book embraces a lifespan and life-course approach to understanding where adolescents have ‘come from’ and are ‘going to’. It also takes very seriously the contexts in which adolescents are developing, holding onto the original theme of the balance between self and other, even virtual others. Infused with stories that illustrate the processes of adolescent identity development, this masterful revision provides students of adolescence and professionals working with youth a stimulating and rich resource. - Sheila K. Marshall, University of British Columbia

This fourth edition of Identity in Adolescence not only provides the most comprehensive review of the theoretical landscape of identity development in adolescence, but it also highlights critical contemporary issues facing identity scholars in our modern digital and global contexts. - Renee Galliher, Utah State University

The new fourth edition of Identity in Adolescence: The Balance between Self and Other addresses and critiques the foundational theories of identity (Erikson, Blos, Marcia, and others) while also looking ahead to contemporary themes, including life in the digital world, intersectionality of identities, and neurological underpinnings of identity. The volume is an important resource for professionals working with adolescents, as well as for parents and those setting policy affecting adolescents. Throughout, it takes a sympathetic view of adolescents and argues for greater understanding of the complex task of identity development in our increasingly identity-conscious world. - Harold D. Grotevant, Ph.D., Rudd Family Foundation Chair in Psychology, University of Massachusetts Amherst

A re-written and updated version of a popular and authoritative book on the most important psychosocial challenge of adolescence: identity formation. New multi-cultural research and practical implications are presented, providing a useful basis for understanding and working with youth as they face the challenges of this crucial developmental stage. - James E. Marcia, Simon Fraser University