In Community of Inquiry with Ann Margaret Sharp
Childhood, Philosophy and Education 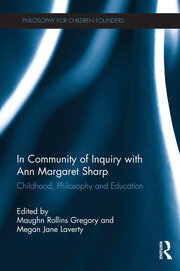 In Community of Inquiry with Ann Margaret Sharp: Childhood, Philosophy and Education

In close collaboration with the late Matthew Lipman, Ann Margaret Sharp pioneered the theory and practice of ‘the community of philosophical inquiry’ (CPI) as a way of practicing ‘Philosophy for Children’ and prepared thousands of philosophers and teachers throughout the world in this practice. In Community of Inquiry with Ann Margaret Sharp represents a long-awaited and much-needed anthology of Sharp’s insightful and influential scholarship, bringing her enduring legacy to new generations of academics, postgraduate students and researchers in the fields of education, philosophy, philosophy of education, Philosophy for Children and philosophy of childhood.

Sharp developed a unique perspective on the interdependence of education, philosophy, personhood and community that remains influential in many parts of the world. This perspective was shaped not only by Sharp’s work in philosophy and education, but also by her avid studies in literature, feminism, aesthetic theory and ecumenical spirituality. Containing valuable contributions from senior figures in the fields in which Sharp produced her most focused scholarship, the chapters in this book present a critical overview of how Sharp’s ideas relate to education, philosophy of education, and the Philosophy for Children movement as a whole.

The historical and philosophical nature of this collection means that it will be a vital resource for philosophers and educators. It should also be of great interest to teacher educators and those involved in the study of pragmatism and feminism, as well as the history of education across the globe, particularly in the United States of America.

Where I Learned Community of Inquiry: Ann Margaret Sharp in Conversation with Peter Shea

1. The Theory of Education Made Flesh (Philip Cam)

2. What is a Community of Inquiry? (Ann Margaret Sharp)

3. Self-Transformation in the Community of Inquiry (Ann Margaret Sharp)

4. The Teacher as Liberator: Ann Margaret Sharp between Philosophy of Education and Teacher Education (Stefano Oliverio)

PART III Ann Margaret Sharp on Ethics, Personhood, and the Community of Inquiry

7. Living in, and with, our Relationships to Others (Laurance J. Splitter)

12. Do we Put What is Precious at Risk through Philosophic Conversation? (Peter Shea)

14. Is there an Essence of Education? (Ann Margaret Sharp)

PART VI Ann Margaret Sharp on Caring Thinking, Education of the Emotions and the Community of Inquiry

15. Caring Thinking, Education of Emotions, and the Community of Inquiry: a Psychological Perspective (Richard E. Morehouse)

16. The Other Dimension of Caring Thinking (Ann Margaret Sharp)

17. Social-Political Dimensions of the Community of Philosophical Inquiry in an Age of Globalization (Jennifer Glaser)

19. The Community of Inquiry: Education for Democracy (Ann Margaret Sharp)

‘This is a timely book that brings together Ann Margaret Sharp’s most significant work, including some material not published before, and clearly shows its enduring importance and influence.’ – Richard Smith, Professor of Education, University of Durham, UK

‘Ann Margaret Sharp was a founding figure of the Philosophy for Children movement, a leading theorist of the classroom community of inquiry, and a spirited and dedicated teacher educator. To those who knew and worked with her, and to thousands around the world who were influenced by her work, she embodied the special joy that comes with practicing philosophy in community. Finally, there is an anthology of Sharp’s work that not only captures the wide-ranging scope and depth of her thought, but also helps establish her rightful place alongside Lipman and Freire as one of the most important global educators of the last half century.’ -

The book is unique in that it is the first publication to offer an anthology of selected articles by Ann Margaret Sharp, a philosopher of education and one of the pioneers of Philosophy for Children, who collaborated with Matthew Lipman to develop a theory and practice of the community of inquiry as a collaborative pedagogy and method for philosophy with children, as well as a pre-college curriculum. The book also brings together eminent international scholars in dialogue with Sharp to critically appraise key areas of education on which she focussed, including: pragmatism; feminism; ethical judgment; religion and spirituality; caring thinking; social, political and global education; and pedagogy and teacher education. Unmistakeably, this book offers a profile of a woman whose scholarly work was inseparable from her teaching and commitment to social justice through education. -

At the very center of Ann Sharp’s concerns there are themes which have always been part of philosophical inquiry: the stimulation of thinking, the building of community, the pursuit of freedom, and -- why not? -- the promotion of democracy. A first step to do justice to this American thinker has been taken by Routledge, one of the most important publishers in the world, which has published a significant volume, In Community of Inquiry with Ann Margaret Sharp. Childhood, Philosophy and Education, edited by Maughn Rollins Gregory and Megan Jane Laverty. The book includes, along with many essays of the New York philosopher, also a series of contributions that explore, if not all, at least many facets of her work. - Simone Paliaga, 'Education and democracy: it is in the community that the free person is born' Avvenire.com

Th[is] new critical anthology ... is indispensable for all those who are attracted by ... questions, like: Who was Ann Margaret Sharp? What was her role in the development of philosophy for children? Why did Lipman credit her with the idea of bringing something new, fresh, vital and exciting, both educationally and philosophically, to philosophy for children? What was her role in the creation of Lipman’s philosophical novels for children and what was her contribution to their teacher manuals? Why did Sharp believe that the practice of the community of philosophical inquiry was all that was needed to turn philosophy for children into a model of educational practice? Why was Sharp initially more dedicated to the concept of "communityofinquiry" than Lipman, and instrumental in his work on its development? And why did Lipman remark that Sharp brought "a kind of human touch" to the movement that he himself "never tried to develop"? - Walter O. Kohan, Educational Theory

[T]his book is a tribute to an extraordinary woman. Ann Margaret Sharp was a formidable, enthusiastic, utterly ethical, inspiringly optimistic, intensely engaged (167), and sometimes forbidding force—much like the program she helped to found. Her writing, however, is delightfully inviting. Anyone interested in trying to make this world a better place, and in transforming education so that young people are shaken out of their complacency (85) and become empowered to enthusiastically grab their own lives by the throat so that they are able to march toward the future with confidence and competence, will treasure this book.-Susan Gardner, Teaching Philosophy

Educators, especially those interested in radical critiques of education and looking for ideas to support their own thinking and practice in relation to what is wrong with our current state of education, will find the book to be of great value. This is especially  true for those who want to challenge the industrial and neoliberal models of education  that permeate our societies. - Bonnie Zuidland, Analytic Teaching and Philosophical Praxis

For Sharp, paying attention to the emotional characteristics of thinking and inquiry is also a form of cultivating reasonableness, an aspect of her intellectual history that comes through in her many writings on Nietzsche, Weil, caring, and pragmatism. In each of these essays what stands out is a recognition that without emotional resonance, philosophy is empty—it stands disconnected from the work of living. In our current era, education has found a renewed interest in considering how caring, kindness, mindfulness, and friendship lie at the center of educational practices and progress. Sharp and her commentators remind us that these concepts are never practiced apart from thoughts, ideas, and ways of living.-Stephanie Burdick-Shepherd, Education and Culture 35(2): 59-64.

Much like the classical pragmatists, Sharp’s philosophy blurs the boundaries between Continental and Analytic philosophy. She seemed willing to draw on whatever ideas and methods were useful to address the important philosophical, educational and social problems with which she was concerned. In this way, her writing emphasizes connections and commonalities between diverse philosophical traditions and academic disciplines, focusing on the strengths of the literature she engages with, rather than its deficits.- Jennifer Bleazby, Educational Philosophy and Theory 51(14), pp. 1541–1542

Apart from theorizing the epistemic, ethical, aesthetic, feminist, political, and spiritual dimensions of the community of inquiry, Sharp was the first to emphasize its social dimensions, or how its practice enables children to become reflective change agents in their own lives through a mutual respect for others and a dialogical search for meaning... Sharp’s interest in developing such new intellectual perspectives explains her commitment to philosophical pluralism and why she was so determined to bring about the transformation of Philosophy for Children materials and methods through engagement with various philosophical and cultural traditions, including Asian, African, and Latin American ones - Chi-Ming Lam, Educational Philosophy and Theory

As Laverty and Gregory portray Sharp, she lived across borders of geography, culture, ability, race, class, social convention, and other forms of difference, oriented by an abiding faith in others.... Whether it was in her early career teaching at Virginia Union University, in helping develop the first PhD program with a concentration in Philosophy for Children at Universidad Iberoamericana in Mexico City, or in her relentless efforts to share philosophy for children with others who were similarly curious, Sharp lived the principles she expresses in her essays. Her belief in the potential for education to liberate and to build community was one she not only articulated, but that she also lived with others whom she inspired and who inspired her in turn.- Nicolas J. Tanchuk, Philosophical Inquiry in Education 26(2): 179-183.

Just as the collection of essays is arranged for various authors to be in community with Ann Margaret Sharp, the reader, too, is similarly invited to listen, reflect, and respond in community with Sharp and her commentators. This anthology is a welcome resource for scholars, practitioners, and learners interested in Philosophy for Children. I enjoyed engaging with the ideas presented by Sharp and her commentators, and look forward to continuing to engage with these ideas in community with others.-  Janice Moskalik, Questions: Philosophy for Young People19 (2019):  27-28.