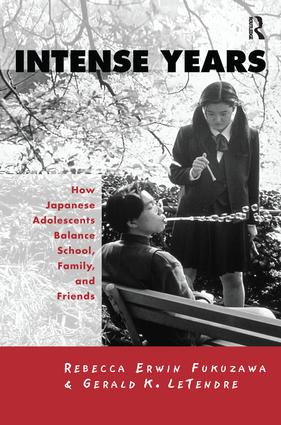 This volume examines the lives of young adolescents in Japanese middle schools, focusing on the dynamics of school, family, and social life, and explores the change from child to adolescent that takes place in the middle school years.

"Fukuzawa and LeTendre offer the reader a new perspective on Japanese education and soceity that demonstrates the successess and problems faced by Japanese students, parents and teachers." -- Addescene

"Intense Years significantly contributes to our understanding of how the Japanese education system is being transformed and the kind of social change that Japan is currently undergoing.the authors convincingly convey the sense that the problems contemporary Japanese adolescents are reported to face are not due to one specific cause. Therefore, there is no single, definite answer to their problems. Rather, their problems derive from a number of external and internal factors including the changing economy, society, and global environment, which all influence in one way or another the experiences of adolescents." -- McGill Journal of Education, Volume 36, Number 3, Fall 2001

"In contrast with many authors who write about Japan by either idealizing or vilifying it, Intense Years neither suggests that the Japanese school system should be a model for schools in the rest of the world, nor do the authors point out the weaknesses of the Japanese school system in order to convey the underlying message that American (or other) schools and, thus, American (or other) societies, are superior to Japanese schools and society. They discuss the internal logic of as well as inconsistencies in the world of Japanese middle schools, using well-chosen quotes that allow the reader to get a sense of the people who are the topic of this project. They portray the points of view of students, parents, and middle school faculty, and describe the ubiquitous private schools, which provide after-school tutoring (and childcare) for those on the academic fast track, and for others who do not want to fall behind." -- Anthropology & Education Quarterly, October 30, 2001

"The authors have a thorough knowledge of rural and urban Japanese middle schools based on many years of structured research and participant observation. would make a fine supplementary text for classes on contemporary Japan, for it provides a wealth of theoretically situated information, and is also a great read. A final strength of the book is that the authors care deeply for middle school students." -- Guven Peter Witteveen, Anthropology & Education Quarterly, December 2001

"Intense Years would make a fine supplementary text for classes on contemporary Japan, for it provides a wealth of theoretically situated information, and is also a great read. A final strength of the book is that the authors care deeply for middle school students." -- Anthropology & Education Quarterly, October 30, 2001

Gerald Letendre is Assistant Professor, Educational Policy, Pennsylvania State. He has most recently published (with Thomas Rohlen) Teaching and Learning in Japan (Cambridge U P, 1996). He received his Ph.D. in education from Stanford University and his M.A. in sociology from Stanford as well. Rebecca Fukuzawa received a Ph.D. in Anthropology from Northwestern University and is currently Lecturer at Tokyo University.