Knowledge, Skills and Competence in the European Labour Market
Whatâ€™s in a Vocational Qualification? 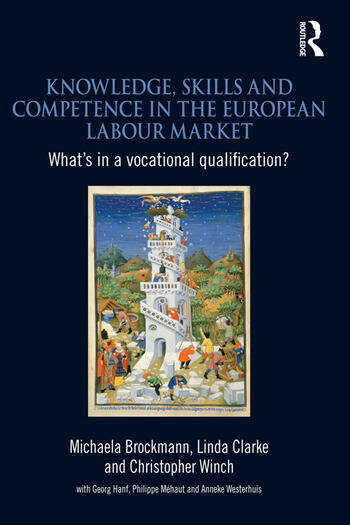 Knowledge, Skills and Competence in the European Labour Market: Whatâ€™s in a Vocational Qualification?

For the free movement of labour across the European Union, establishing transparency and comparability of qualifications across member states is vital.

This book examines how qualifications, knowledge, skills and competences are understood in different national contexts and trans-nationally and reveals a complex picture of differences and similarities both within and between countries. Against the background of EU policy initiatives, and in particular the European Qualifications Framework, an important focus is on the prospects and difficulties of establishing cross-national recognition of qualifications.

Drawing on case studies of particular sectors and occupations in England, France, Germany and the Netherlands, this insightful book, written by leading academics in the field, will be a vital resource for students and researchers involved with vocational education and training, continuing professional development, human resource management and European Union policy.

Michaela Brockmann is a Senior Research Fellow at the University of Westminster, UK.

Linda Clarke is Professor of European Industrial Relations at the University of Westminster, UK.

'Policy makers and scholars across the globe who are interested in the question of skill formation whether in practical aspects such as establishing parity in qualifications in particular occupations from across country borders or in philosophical aspects such as the role liberal education should play in the vocational curriculum, would find this book to be of great interest. The authors take a grounded theory approach that adds realism and authenticity to what they have to say. The draw on illustrations from nursing and truck driving to show the pitfalls inherent in thinking that skill is easily transferable across borders.'

'This book courageously confronts the issues with which the whole of Europe is struggling: qualifications and the labour market! Its challenge is to show how, despite strong path dependency, there can be as much diversity between as within countries in the understanding of knowledge, skills and competences. This is a very valuable contribution to present European debates on the "legibility" tools that are the European Qualifications Framework (EQF) and the European Credit System for Vocational Education and Training (ECVET).'

'This is a timely book, providing, for the first time in English, detailed and critically informed accounts of the historical and conceptual basis of vocational education in Germany, France and the Netherlands. It will be a unique resource, not only for comparative studies, but also for policy makers seeking to build on the possibilities of the European Qualifications Framework.'