Labour Law Reforms in India
All in the Name of Jobs 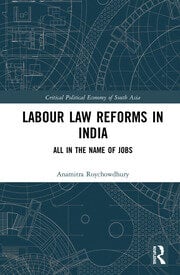 Labour Law Reforms in India: All in the Name of Jobs

Labour market flexibility is one of the most closely debated public policy issues in India. This book provides a theoretical framework to understand the subject, and empirically examines to what extent India’s ‘jobless growth’ may be attributed to labour laws. There is a pervasive view that the country’s low manufacturing base and inability to generate jobs is primarily due to rigid labour laws. Therefore, job creation is sought to be boosted by reforming labour laws. However, the book argues that if labour laws are made flexible, then there are adverse consequences for workers: dismantled job security weakens workers’ bargaining power, incapacitates trade union movement, skews class distribution of output, dilutes workers’ rights, and renders them vulnerable. The book:

This book will interest scholars and researchers in economics, development studies, and public policy as well as economists, policymakers, and teachers of human resource management.

Anamitra Roychowdhury teaches economics at Jawaharlal Nehru University, New Delhi, India. Previously, he taught at St. Stephen’s College, University of Delhi. He completed his doctoral studies at Jawaharlal Nehru University and his areas of interest include development economics, labour economics, Indian economy and macroeconomics. He has published a number of research articles in many renowned international and national journals including International Labour Review, Agrarian South: Journal of Political Economy, Economic and Political Weekly and Social Scientist. His commentaries on contemporary economic issues have appeared in Global Labour Column, Mainstream and Macroscan.

‘This excellent study skillfully combines information about labour laws with theoretical analysis. It deserves to be read by all, researchers, politicians and practitioners in the field who are not swayed by oversimplified rhetoric of labour market reform.’

‘Dr Anamitra Roychowdhury’s book Labour Law Reforms in India: All in the Name of Jobs is a careful analysis of one of the major economic questions in recent times. After critically evaluating the voluminous literature, the author builds formal analytical models to explain the empirical findings. The book is a valuable addition to the academic and policy discourse.’

‘This book alerts us that increasingly employers will offer contract rather than permanent work. It examines the theory behind labour market flexibility and offers us a macroeconomic perspective that contradicts the one which focuses solely on the labour market without considering the repercussions at the aggregate economy wide level. It is important reading for those concerned about the future of livelihoods and how developing nations should respond to that.’

‘That the inevitable result of flexibility in the labour market—either by legislation or by stealth—has been widening gaps in income and well-being is now accepted by many economists with greater equanimity than before. This book will have further sobering effect on the supporters of the so-called labour market flexibility as it critically looks at the theoretical arguments that provide justification for flexibility. With a balanced combination of theoretical arguments and empirical evidence the book eminently accomplishes what i