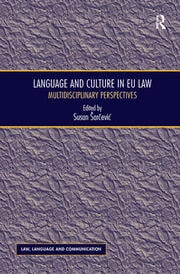 Written by distinguished legal and linguistic scholars and practitioners from the EU institutions, the contributions in this volume provide multidisciplinary perspectives on the vital role of language and culture as key forces shaping the dynamics of EU law. The broad spectrum of topics sheds light on major Europeanization processes at work: the gradual creation of a neutralized EU legal language with uniform concepts, for example, in the DCFR and CESL, and the emergence of a European legal culture. The main focus is on EU multilingual lawmaking, with special emphasis on problems of legal translation and term formation in the multilingual and multicultural European context, including comparative law aspects and an analysis of the advantages and disadvantages of translating from a lingua franca. Of equal importance are issues relating to the multilingual interpretation of EU legislation and case law by the national courts and interpretative techniques of the CJEU, as well as the viability of the autonomy of EU legal concepts and the need for the professionalization of court interpreters Union-wide in response to Directive 2010/64/EU. Offering a good mix of theory and practice, this book is intended for scholars, practitioners and students with a special interest in the legal-linguistic aspects of EU law and their impact on old and new Member States and candidate countries as well.

Susan Å arÄeviÄ‡ is Professor and former Head of the Department of Foreign Languages at the Faculty of Law of the University of Rijeka where she taught Legal English, Legal German and EU Terminology. She publishes extensively and lectures worldwide on legal translation and comparative legal terminology. Her best-known work is New Approach to Legal Translation. She is Research Professor at the Research Centre for Legal Translation of the China University of Political Science and Law in Beijing.

"In multilingual Europe thorough studies on legal language are increasingly needed, especially as a result of recent and prospective enlargements of the European Union. This multifaceted volume is an important contribution to the studies of EU languages, and it can be warmly recommended for a wide readership of both lawyers and linguists." - Heikki E.S. Mattila, University of Lapland, Finland

"Globalization has changed the relation of law to language. A bewildering example of this change is the case of the EU: how to maintain a "dialogue" engaging legal translation with 24 different languages? Through their collective efforts, Sarcevic and her contributors, via a wealth of multidisciplinary perspectives, offer both a gallant and inspiring analysis of the EU's labours of Hercules in its search for establishing a sui generis legal culture and language." - Jean-Claude Gemar, Universite de Montreal, Canada

"This book gives a range of insights into the process by which the EU makes laws that have to work in the same way in 24 languages and in 28 Member States. It highlights many of the paradoxes and tensions inherent in that process and the problems confronting those taking part in the process. Apart from offering some practical solutions to those problems, it should contribute to a better understanding of the final product of that process, EU legislation itself." - William Robinson, Institute of Advanced Legal Studies, University of London, UK

"Legal translation has become the glue that binds the EU, with its 24 official languages and myriad of legal and social cultures. This volume collects work from among the very best writers who study the successes and the problems of the daunting enterprise of ensuring that people who do not understand one another live in a legal culture understood by all. It is a wonderful assembly of essays that should be must reading for all who study the EU, whether as lawyers, linguists, translators, political scientists or from other disciplines. In fact the book is so engaging that even those with a casual interest in the similarities and differences among languages will find it to be a very good read." - Lawrence M. Solan, Brooklyn Law School, USA