Leadership in Higher Education
Views from the Presidency 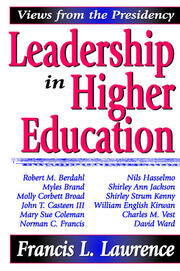 Leadership in Higher Education: Views from the Presidency

In this collection of interviews, presidents and chancellors of some of America's most respected universities candidly reflect on their experiences during the decade leading up to the twenty-first century and immediately following it. This was a time of change and uncertainty, when opportunities for achievement and potential for failure made their role uncommonly challenging, and success called for considerable determination, integrity, foresight, skill, and courage.

The American higher education system, often characterized as the best in the world, is distinguished for its scholarship as well as its accessibility. Its indispensable role as an engine for individual and societal economic advancement has made universities the targets of media interest, critical examination, and political manipulation. Higher education has become the passport to the American dream, and the percentage of those going to college has increased, challenging individual institutions and systems to accommodate growing numbers of aspiring students while searching for solutions to problems of inadequate college preparation and inadequate financial assistance for low-income students. Despite their increasing importance to the nation, the region, and their communities, public and private universities have seen states reduce their support to their state systems of higher education, shifting the responsibility to individuals and institutions.