In the global marketplace, no business is a self-contained island. No matter how effective your internal material movement, to be a future-thinking business, you must go to the next step and develop long-term supplier partnerships built on a dedication to continuous improvement and the basic concepts of Lean implementation.

Lean Supplier Development: Establishing Partnerships and True Costs Throughout the Supply Chain provides step-by-step instruction on how to build partnerships of mutual improvement and success through supplier development. Offering the same advice that they have successfully applied to corporations across the globe, award-winning consultants Chris Harris, Rick Harris, and Chuck Streeter —

Lean is a journey, not a destination. It requires flexible leaders at the helm who can readily adjust to ever-changing conditions and it requires like-minded partners all along the supply chain. Finding and developing these partners is not about good fortune, it is all about an uncompromising approach to continuous improvement and the application of systematic methods that will build working partnerships that broaden your definition of what is possible

Dr. Chris Harris is a coauthor of the Shingo Prize-winning book Making Materials Flow, published by Jim Womack and the Lean Enterprise Institute. Chris has also coauthored two other books with Rick Harris, one on human resources’ role in Lean manufacturing, entitled Developing a Lean Workforce, published by Productivity Press; and the other on the vital information flow in a production facility, entitled Lean Connections, also published by Productivity Press. Chris has also written many articles on Lean production systems. Chris began his Lean manufacturing training as a team member on the assembly line at Toyota Motor Manufacturing Kentucky (TMMK). He continued his Lean training at Toyota Tsusho America in Georgetown, Kentucky and at Delphi Alternator Division in Anderson, Indiana. Chris has a doctorate in business administration from the Anderson University Falls School of Business in Indiana. He is vice president of operations for Harris Lean Systems (www.harrisleansystems.com).

Rick Harris is the president of Harris Lean Systems and has been helping companies to become Lean for the past 15 years. HLS, Inc. has been instrumental in assisting companies worldwide with major cost reductions. Rick helps with the actual implementation on the shop floor and the education of the workforce. He has pioneered the reverse flow process to achieve increases in efficiency. Rick has extensive experience in developing new manufacturing layouts that facilitate one-piece flow, operator flexibility, operator engagement, first time through quality, optimum uptime, and reduced capital investment. Rick has also coauthored the two Shingo Prize-winning books Creating Continuous Flow and Making Materials Flow, published by James Womack and the Lean Enterprise Institute. Rick has also coauthored two other books with his son, Dr. Chris Harris: Developing a Lean Workforce and Lean Connections. Rick received his Lean training while serving as a manager in assembly at the Toyota plant in Georgetown, Kentucky and continued his Lean learning at the Toyota Tsutsumi Assembly Plant in Japan. He was a member of the start-up team at TMMK, where he gained extensive knowledge of the Toyota Production System. Prior to his Toyota experience, he spent 15 years with General Motors.

Chuck Streeter is the owner of Streeter Lean Principles, LLC located in Indianapolis, Indiana. Chuck has worked with Rick Harris for over ten years, helping companies navigate through their Lean business system transformation journeys. Chuck gained much of his Lean knowledge working for companies in the automotive and electrical industries, with a majority of that being under the guidance of Rick Harris. As a Lean practitioner he has helped guide facilities to best improved, plant of the year, and corporate excellence accolades while instilling the principles of Lean in both their manufacturing and business processes. Chuck gained his formal education with a bachelor of science in management from the U.S. Air Force Academy and a master of science in systems management from the Air Force Institute of Technology. Chuck is a level III certified acquisition program manager, as well as a retired commissioned officer in the U.S. Air Force Reserve.

Most companies struggle to move beyond the four walls of their business during a lean journey. Many lean leaders have never ventured to the great world of the unknown related to the supplier, but for lean to reach continued breakthrough levels of performance, lean supplier development is required to extend throughout the entire supply chain. Conversations around supply chain lean activity abounds in the consulting world, but few people can bring real life success stories, experience and processes to the picture as Rick Harris, Dr Chris Harris and Chuck Streeter. Their personal, hands on experience is evident once again in this book, their latest venture in true kaizen. They have the unique ability to shoot straight at the target and never talk over the head of the audience. The reader is able to understand the thinking process and then begin implementation starting with the opening lines of the book. This book is not just thoughts, but a detailed process of why, how and when to begin and implement lean supplier development. If your company accelerated improvement with Rick’s red book and shot life into it with the green book, this book will take performance of the total supply chain to an all new level. Let Rick, Chris and Chuck help you enjoy, not fear, the journey!
—Mark Gooch, VP Lean Enterprise, Pentair, Inc.

Rick and Chris Harris' practical knowledge from so much work in the field helping businesses with lean transformations shines through in this piece of work. The book can be viewed as a checklist adaptable to any business striving to develop an effective supply chain. Be careful not to miss the real gems they offer in the simple and sometimes subtle warnings of traditional behaviors that could impede future success.

For most manufacturing based businesses direct material costs account for 40-60% of COGs. It is therefore absolutely IMPERATIVE that your supply base become LEAN practitioners if your company is to fully capture the strategic and operational benefits of becoming a truly LEAN Enterprise. Rick and Chris Harris provide a roadmap to accomplishing that goal.  Read it, understand it, adopt the principles yourself, convert your supply base and watch your top line revenues and bottom line profits grow!
— Rick Dauch, President and CEO, Acument Global Technologies 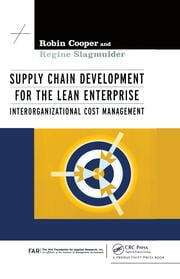 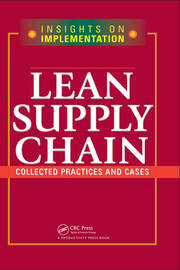 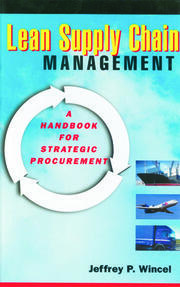