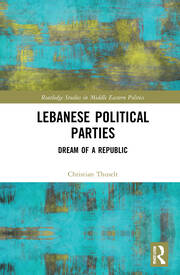 This book examines Lebanese political parties and their encounters with modernity. Taking three, mainly Christian parties as an example, the book refutes the idea of Middle Eastern parties being backwards or antiquated. By combining historical and anthropological perspectives, it is shown that these parties stand for normativities of modernity.

Lebanese, as well as Middle Eastern parties in general, have a rather poor reputation: they are considered family-based, ideologically meaningless, tailored solely to their leadership, and non-modern. Contrastingly, this book claims that the concept of the "real party" corresponds to an encounter with modernity and that these parties, although dysfunctional in parts, are better than their reputation. Most importantly, Lebanese parties are taking the nation-state as their central reference point, as they recognise it as the legitimate form of societal organization. The volume claims that important constituents of modernity, such as the individual, the nation, secularity, progress, and representing the people (demos), serve for the parties in question as resources of utopian elements.

Bringing Lebanese political parties into a global debate on modernity, the book tackles the notion of parties of the Middle East being non-modern. It will be of interest to scholars researching political science, political history and the Middle East.

2. The Emergence of Political Parties in Lebanon

5. Parties and their Adherents

is teaching political science at the Friedrich-Alexander-University, Erlangen-Nüremberg, Germany. He completed his PhD at Roskilde-University, Denmark. His research interests are political parties, political theory, intellectual and history of the Middle East.