Liberal Education and Its Discontents
The Crisis in the Indian University 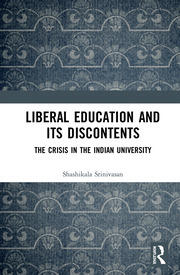 Liberal Education and Its Discontents: The Crisis in the Indian University

This book explores these vital questions and traces the intellectual history of the idea of education and the cluster of concepts associated with it. It probes into the cultural roots of liberal education and seeks to understand its scope, effects and limits when transplanted into the Indian context. With an extensive analysis of the philosophical writing on the idea of university and education in the West and colonial documents on education in India, the book reconstructs the ideas of Gandhi and Tagore on education and learning as a radical alternative to the inherited, European model. The author further reflects upon how we can successfully deepen liberal education in India as well as construct alternative models that will help us diversify higher learning for future generations.

Lucid, extensive and of immediate interest, this book will be useful for scholars and researchers interested in the history and philosophy of education and culture, social epistemology, ethics, postcolonial studies, cultural studies and public policy.

Shashikala Srinivasan is an independent scholar based in Bengaluru, India. A Fulbright-Nehru Scholar (2012–13), she has a doctorate in Cultural Studies from the Centre for the Study of Culture and Society, affiliated to Manipal University, Karnataka, India. Her work cuts across philosophy of education and culture, social epistemology, postcolonial studies and literature. She has offered courses in liberal arts as a visiting faculty in Srishti Institute of Art, Design and Technology, Bengaluru and has previously taught as a senior faculty member in the English Department, Mount Carmel College, Bengaluru. She is at present further exploring the comparative intellectual history of learning traditions, the relationship between cultures and forms of knowledge as well as the differing conceptions of education, ethical learning and reflection in Europe and India.

"This book provides a panoramic understanding of colonial education in India from its roots in Christian theology to its secularization in the notions of the moral formation of the self. It then presents with skill and depth, hitherto unavailable in scholarly writing on this subject, how the work of Tagore and Gandhi on education provides a radical and wholesale alternative to the very idea of such a ‘liberal' education as it was constructed in the modern West and its colonial spread. Nothing less than a new notion of reflection emerges out of these scrupulous and insightful explorations, one that turns not on dichotomies of ‘self’ and ‘world', but on the refusal of that dichotomy in wisely and creatively elaborated notions of ‘practice' and ‘experience'. Gandhi and Tagore have long deserved this kind of comprehending and illuminating reading that they are finally getting in this book." — Akeel Bilgrami, Sidney Morgenbesser Professor of Philosophy, Columbia University, New York City, USA

"Dr Shashikala Srinivasan pursues ideas with the same degree of concern for details as she shows while probing the history of ideas and decisions. In other words, she does full justice to the demands of an interdisciplinary approach. The highlight of her historical analysis is the interpretation she offers of Adam's reports on indigenous institutions. This analysis is sharp, original and adequate for establishing the argument put forward in the book. Her engagement with Gandhi's ideas is impressive and throws original light on the conceptual roots of his proposal for craft-centric education."

"There has hardly been any serious attempt to understand the crisis through a philosophical interrogation of the conception of education which shaped our idea of the university. Shashikala Srinivasan’s book on the impasse of liberal education in India develops a framework for such an interrogation and seeks to understand the possible reasons for the conception of liberal education not taking root in India."

"The book is a serious and original exploration into the theoretical grounds of liberal education and its limits, in the Indian context. Substantial in scholarship, incisive in analysis, the book offers a lucid exposition of issues. Dr. Srinivasan competently weaves theoretical analysis with historical accounts. The book makes a pleasurable reading." —