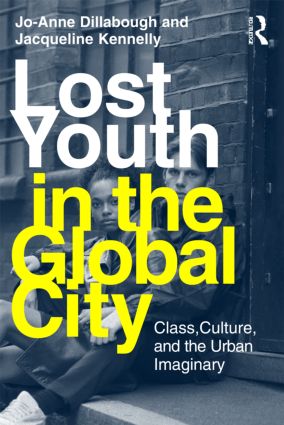 Lost Youth in the Global City

What does it mean to be young, to be economically disadvantaged, and to be subject to constant surveillance both from the formal agencies of the state and from the informal challenge of competing youth groups? What is life like for young people living on the fringe of global cities in late modernity, no longer at the center of city life, but pushed instead to new and insecure margins of the urban inner city? How are changing patterns of migration and work, along with shifting gender roles and expectations, impacting marginalized youth in the radically transformed urban city of the twenty-first century?

In Lost Youth in the Global City, Jo-Anne Dillabough and Jacqueline Kennelly focus on young people who live at the margins of urban centers, the "edges" where low-income, immigrant, and other disenfranchised youth are increasingly finding and defining themselves. Taking the imperative of multi-sited ethnography and urban youth cultures as a starting point, this rich and layered book offers a detailed exploration of the ways in which these groups of young people, marked by economic disadvantage and ethnic and religious diversity, have sought to navigate a new urban terrain and, in so doing, have come to see themselves in new ways. By giving these young people shape and form – both looking across their experiences in different cities and attending to their particularities – Lost Youth in the Global City sets a productive and generative agenda for the field of critical youth studies.

3. Lost Youth and Urban Landscapes: Researching the Interface of Youth Imaginaries and Urbanization

6. Impossible Citizens in the Global Metropolis: Race, Landscapes of Power and the New ‘Emotional Geographies’ of the City

7. Legitimacy, Risk and Belonging in the Global City: Individualization and the Language of Citizenship

Jo-Anne Dillabough is Reader at the University of Cambridge and Associate Professor in the Department of Educational Studies, University of British Columbia.

Jacqueline Kennelly is Assistant Professor in the Department of Sociology and Anthropology at Carleton University.

Set against the massive social, cultural, and material dislocations of the new century, Critical Youth Studies interrogates the complex cultural dimensions of young people’s everyday lives today. Drawing together the work of both well known and emerging scholars, this series focuses on "youth studies" as a self-constituting, trans-disciplinary area of inquiry. Operating largely at the specific intersection of education, sociology, and media studies, Critical Youth Studies features authored and edited books, drawing on a range of methods and approaches, treating the span of issues most relevant to youth today.