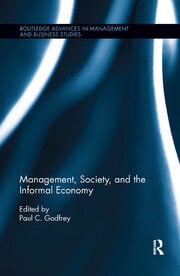 What many fail to realize, however, is the increasing presence of informal economic activity in the developed world’s largest corporations and most innovative entrepreneurial ventures, such as technology development work in Silicon Valley, open source software agreements, or employment arrangements between "technology stars" and firms.

brings to light the role of the informal economy in the 21st century. The book does more than illuminate, however – it also calls for increased focus on the informal economy by management scholars. Each chapter contains a call to action, as well as practical and methodological advice for scholarship on the topic.

contains a multi-faceted set of arguments, descriptions, and illustrations designed to convince management scholars that they should attend to the informal economy and view it as a serious and rigorous context for theorizing, empirical research, and even practical advocacy.

Paul Godfrey is the William and Roceil Low Professor of Business Strategy and Organizational leadership at the Marriott School of Business, Brigham Young University, USA