Mass Media, An Aging Population, and the Baby Boomers 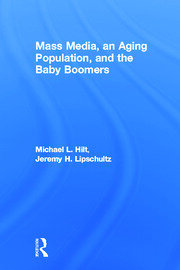 Mass Media, An Aging Population, and the Baby Boomers

As the oldest members of the baby boomer generation head into their retirement years, this demographic shift is having a substantial influence on uses of mass media, as well as the images portrayed in these media. Mass Media, An Aging Population, and the Baby Boomers provides a comprehensive examination of the relationship between media and aging issues, addressing mass media theory and practice as it relates to older Americans.

Reviewing current research on communication and gerontology, authors Michael Hilt and Jeremy Lipschultz focus on aging baby boomers and their experiences with television, radio, print media, entertainment, advertising and public relations, along with the Internet and new media. They draw from studies about health and sexuality to understand views of aging, and present a view of older people as important players in the political process. Hilt and Lipschultz conclude the volume by addressing trends and making predictions related to baby boomers and mass media.

Providing a timely and insightful examination of the linkage between mass media and aging issues, this volume will prove a valuable resource for scholars and students in media and gerontology. It is intended for use in coursework addressing such topics as mass communication and society, media and aging, media and public opinion, sociology, and social gerontology.

"Providing a timely and insightful examination of the linkage between mass media and aging issues, Mass Media, An Aging Population and the Baby Boomers will prove a valuable resource for scholars and students in media and gerontology. This book may be used in undergraduate and graduate courses in communication, gerontology, sociology, and political science."
—SirReadaLot.org

"One major strength is that the authors provide a comprehensive overview of relevant theories in the media field. Every chapter presents a condensed literature review of recent studies related to specific chapter themes."
—PsycCritiques