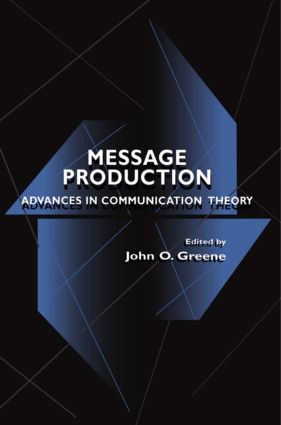 The last two decades have seen the development of a number of models that have proven particularly important in advancing understanding of message-production processes. Now it appears that a "second generation" of theories is emerging, one that reflects considerable conceptual advances over earlier models. Message Production: Advances in Communication Theory focuses on these new developments in theoretical approaches to verbal and nonverbal message production. The chapters reflect a number of characteristics and trends resident in these theories including:

* the nature and source of interaction goals;

* the impact of physiological factors on message behavior;

* the prominence accorded conceptions of goals and planning;

* efforts to incorporate physiological constructs and to meld them with psychological and social terms.

The processes underlying the production of verbal and nonverbal behaviors are exceedingly complex, so much so that they resist the development of unified explanatory schemes. The alternative is the mosaic of emerging theories such as are represented in this book -- each approach according prominence to certain message-production phenomena while obscuring others, and providing a window on some portion of the processes that give rise to those phenomena while remaining mute about other processes. The amalgam of these disparate treatments, then, becomes the most intellectually compelling characterization of message-production processes.