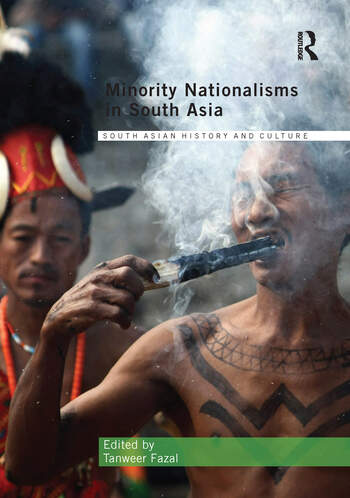 South Asia is the theatre of myriad experimentations with nationalisms of various kinds - religious, linguistic, religio-linguistic, composite, plural and exclusivist. In all the region’s major states, officially promulgated nationalism at various times has been fiercely contested by minority groups intent on preserving what they see as the pristine purity of their own cultural inheritance.

This volume examines the perspective of minority identities as they negotiate their terms of co-existence, accommodation and adaptation with several other competing identities within the framework of the ‘nation state’ in South Asia. It examines three different kinds of minority articulations – cultural conclaves with real or fictitious attachments to an imaginary homeland, the identity problems of dispersed minorities with no territorial claims and the aspirations of indigenous communities, tribes or ethnicities.

This book was published as a special issue of South Asian History and Culture.

1. Introduction: Minorities and their nationalism(s): the terms of a discourse in South Asia  Tanweer Fazal  2. Expanding imaginations: theory and praxis of Naga nation making in post colonial India  Sajal Nag  3. The multiple self: interfaces between Pashtun nationalism and religious conflict on the frontier  Rubina Saigol  4. ‘We are with culture but without geography’: locating Sylheti identity in contemporary India  Nabanipa Bhattacharjee  5. Minority rights and the nationalist doctrine in India: contestation and coalescence in the public sphere  Tanweer Fazal  6. ‘We can leave neither’: Mohamed Ali, Islam and Nationalism in colonial India  M. Raisur Rahman  7. Contours of Muslim nationalism in Sri Lanka  Zarin Ahmad  8. Amidst the winds of change: the Hindu minority in Bangladesh  Meghna Guhathakurta  9. Pakistan’s policies and practices towards the religious minorities  Tariq Rahman