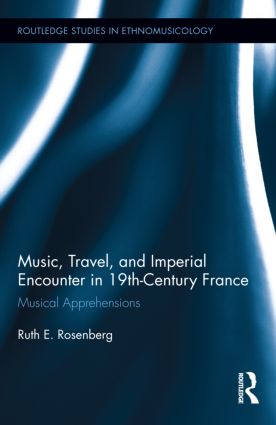 This book considers the activities and writings of early song collectors and proto-ethnomusicologists, memoirists, and other "musical travelers" in 19th-century France. Each of the book’s discrete but interrelated chapters is devoted to a different geographic and discursive site of empire, examining French representations of musical encounters in North America, the Middle East, as well as in contested areas within the borders of metropolitan France. Rosenberg highlights intersections between an emergent ethnographie musicale in France and narratives of musical encounter found in French travel literature, connecting both phenomena to France’s imperial aspirations and nationalist anxieties in the period from the Revolution to the late-nineteenth century. It is therefore an excellent research tool for scholars in the fields of ethnomusicology, musicology, cultural studies, literary history, and postcolonial studies.

"Rosenberg presents a meaningful and significant contribution to scholarship in this field and makes a strong case that much is to be gained from further exploration along the lines she has begun to pursue in this book."

Introduction: Musical Apprehensions Part 1: Apprehending Other Worlds: Musical Journeys in New and Old Empires 1. Imperial Ears: G.A. Villoteau and Napoleon’s Egyptian Campaign (1798-1801) 2. The Music of France’s Lost Empire and the Romantic Travelogue Part 2: Apprehending France: The Meaning of Folksong Within and Without 3. Between Paris and the Provinces: Ideologies of Song and Folksong Collection 4. France's Furies: Women's Laments and the Imagination of Corsica

Ruth E. Rosenberg is Assistant Professor of Music at the University of Illinois-Chicago. Her research is multi-disciplinary, drawing from ethnomusicology, musicology, gender and women’s studies, and postcolonial theory. She has published articles on women’s laments in Corsica and music and French imperialism in the journals Current Musicology, Musical Quarterly, and Nineteenth-Century French Studies.

Routledge Studies in Ethnomusicology is dedicated to expanding the field of ethnomusicology with innovative studies and edited collections. Publishing new, cutting-edge research into our global music heritage, the series will concentrate on area studies from all corners of the world.