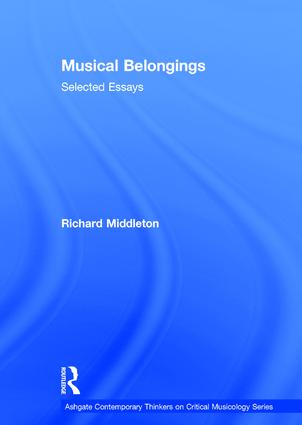 One of the pioneers of popular music studies, Richard Middleton has made an important contribution not only to this particular field but also to the critical and cultural theory of music more generally. Sixteen of his essays, dating from the late 1970s to the present day, have been selected for this collection, most of them previously published but some of which are new. The musical topics vary widely, from Mozart and Gershwin to rock and rap, from music hall to blues and jazz, from Elvis Presley and John Lennon to Patti Smith and Mariah Carey. But throughout, the author is concerned to locate appropriate ways of understanding 'the popular', and suggests that this task is crucial to any critical musicology worth the name. In a substantial introduction, he places his own intellectual development in the context of the development of the discipline, offering his latest thoughts on the past, present and future of critical musicology and its place in the critique of modernity. The overall theme, 'musical belongings', is revealed as a key not only to the relationship between music and the politics of possession, but also, by extension, to the investments made by musicology, critical and other, in those politics.

Contents: Introduction; Selected bibliography; All shook up? Innovation and continuity in Elvis Presley's vocal style; Articulating musical meaning/reconstructing musical history/locating the popular; Authorship, gender and the construction of meaning in the Eurythmics' hit recordings; The 'problem' of popular music; Were the Rockers right? Revolution and legitimation in British pop music of the 1960s; Musical belongings: Western music and its low-other; Work-in(g)-practice: configurations of the popular music intertext; Locating the people: music and the popular; Performing culture, appropriating the phallus; The real thing? The spectre of authenticity in modern musical thought; 'Last night a DJ saved my life': avians, cyborgs and gendered bodies in the era of phonographic technology; O Brother, let's go down home: loss, nostalgia and the Blues; Mum's the word: men's singing and maternal law; Global, national, local: or, a hysteric's account of negative dialectics; Jazz: music of the multitude?; Vox populi, vox dei or, imagine, I'm losing my religion (hallelujah!): musical politics after God; Index.

The titles in this series bring together a selection of previously published and some unpublished essays by leading authorities in the field of critical musicology. The essays are chosen from a wide range of publications and so make key works available in a more accessible form. The authors have all made a selection of their own work in one volume with an introduction which discusses the essays chosen and puts them into context. A full bibliography points the reader to other publications which might not be included in the volume for reasons of space. The previously published essays are published using the facsimile method of reproduction to retain their original pagination, so that students and scholars can easily reference the essays in their original form.