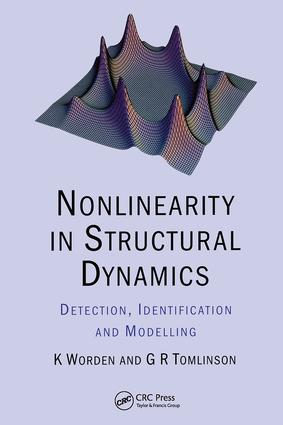 Many types of engineering structures exhibit nonlinear behavior under real operating conditions. Sometimes the unpredicted nonlinear behavior of a system results in catastrophic failure. In civil engineering, grandstands at sporting events and concerts may be prone to nonlinear oscillations due to looseness of joints, friction, and crowd movements. In the aerospace industry, nonlinear motions may have serious implications for fatigue life. In the automotive industry, examples include brake sequel and undesirable engine mounting oscillations. Engineers of all types encounter nonlinear behavior in a system at some time in their working lives and should be able to recognize it.

Nonlinearity in Structural Dynamics: Detection, Identification and Modeling provides a background in techniques that can be applied to situations in which nonlinearity plays, or is suspected to play, a role in the dynamic structural behavior. Striking a good balance between theory and application, the book covers both analytical and experimental methods and describes their application to real structures. The authors include numerous examples of nonlinearity in real engineering systems. The book is essential reading for engineers and scientists in the fields of structural dynamics and nonlinearity as well as a useful supplement for graduate and senior undergraduate students in engineering courses.

"This book provides an important contribution to the challenging world of nonlinear structural dynamics and mechanical vibration. One of the most interesting features of the book is the perfect balance the authors have provided, between computational and experimental methods, and between theory and practical applications. I strongly recommend this book to researchers (in engineering and sciences) and practicing engineers (in aerospace, civil, and mechanical industries) who are actively investigating the role of nonlinearities in structural and mechanical systems. It could be used as a supplementary or reference text for graduate and undergraduate students in this field."