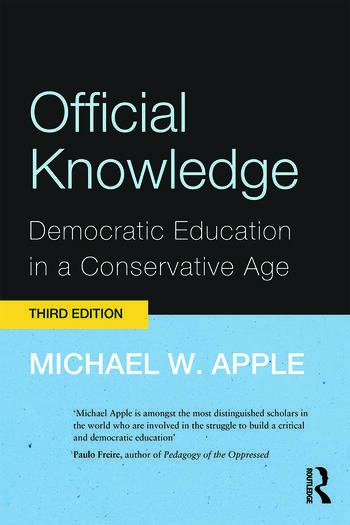 This third edition of Official Knowledge, a classic text from one of education’s most distinguished scholars, challenges readers to critically examine how certain knowledge comes to be “official,” and whose agendas this knowledge represents. A probing and award-winning study, this new edition builds on the tradition of its predecessors to question the rightist resurgence in education while substantive updates throughout show how such policies continue to define our commonsense notions about what counts as a good school.

A new preface and two full, new chapters address current controversies over curriculum and textbooks, and extend the discussion of previous editions to reflect on some of the most important pressures being placed on higher education as well. Apple also considers the recent conversion of some prominent neoliberal, neoconservative, and managerial thinkers to more critical understandings of educational policies, proving that progressive change is possible if we examine the roots of these ideologies in the first place. As insightful as it is thorough, Official Knowledge is a refreshing call to challenge the dominant forces within education today, as Apple powerfully illustrates how larger social movements are only possible if we purposefully and inclusively deepen our understanding of the existing body of knowledge about education.

1. Introduction: The Politics  of Official  Knowledge

2. The Politics  of Common-Sense: Why  the Right  Is Winning

3. Cultural Politics  and the Text

5. Creating the Captive  Audience: Channel One and the Political  Economy of the Text

6. Whose  Curriculum Is This  Anyway? (with Susan Jungck)

8. The Politics  of Pedagogy and the Building of Community

9. Managerialism, Labor, and Emerging Movements in the Global University

10.A Reason for Hope? Changing Minds and the Fate of American Schools

"This third edition of Official Knowledge [1st ed., (CH, Jun'00, 37-5796)] continues his quest "to ... uncover the relationships ... between educational policy and practice, and the relations of domination and exploitation of the larger society."...Apple is unambiguous; there is no opaqueness often associated with this kind of criticism. He believes that critical analysis also must be constructive, so his (new) concluding chapter, "Changing Minds," should be well received.Summing Up: Highly recommended. Upper-division undergraduates and above."- R. R. Sherman, University of Florida, in CHOICE, January 2015.

"Michael Apple is rightly regarded as one of the world’s foremost critical educators. In this third edition of his classic text, Apple provides a searing and provocative indictment of the global rightist strategies that are reshaping education into ever-more exclusionary and oppressive forms while simultaneously proclaiming their commitment to standards and freedom. Eloquent, wise and committed, Apple’s work is critical scholarship at its very best."—David Gillborn, Professor of Critical Race Studies and Director, Centre for Research in Race & Education (CRRE), University of Birmingham, UK

"Twenty years after it was first published, Official Knowledge remains one of the most critical books for understanding the current crisis in education. Apple's insights into the relationship between democracy and education—and what has gone so powerfully wrong in the past decades—are both brilliant and inspiring. Engaging with the remarkable and lucid arguments in this timeless book is a critical step towards finding a more humane and democratic path, and restoring hope for teachers, parents, and students."—Nadine Dolby, Professor of Curriculum Studies, College of Education, Purdue University, USA

"Throughout his extensive and distinguished oeuvre, critical cultural theorist Michael Apple argues that education is deeply implicated in the politics of culture. In this fully revised and updated third edition of Official Knowledge, Apple is at his best: It is a clear and elegantly written book informed by an inspiring narrative full of energy, passion, compassion, and original critical analysis. In an eloquent synthesis that is difficult to achieve, Apple reclaims a much-needed democratic vision of public education. This is one of those rare books that has passed the test of time, becoming a classic of critical studies in education, and his third edition just made it better."—Carlos Alberto Torres, Professor and Associate Dean for Global Programs and Director, Paulo Freire Institute, Graduate School of Education and Information Studies, University of California, Los Angeles, USA

"At this time, as Rightist power proves both tenacious and unstable, Michael Apple’s classic diagnosis of ‘The Right’ as an unsettled settlement of various cultural, political and economic forces remains deeply insightful. Across educational fronts of policy, curriculum, popular culture and more, Apple traces Rightist moves to capture diverse social groups in a simplistic ‘commonsense,’ as well as how ‘the margins’ battle back from multiple standpoints to build better sense. Updates and additional chapters in this 3rd edition of Official Knowledge underscore the new dangers, yet new openings for movement towards educational and social justice, in contexts of global financial crisis."—Lew Zipin, Victoria University, Melbourne, Australia