On the Politics of Educational Theory
Rhetoric, theoretical ambiguity, and the construction of society 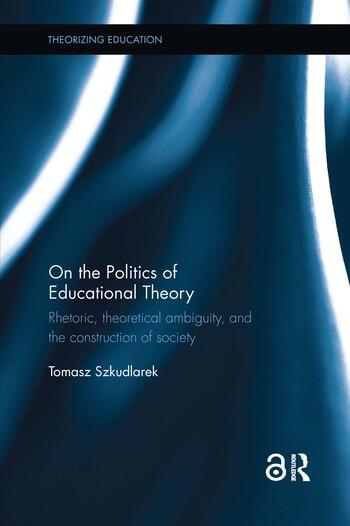 On the Politics of Educational Theory: Rhetoric, theoretical ambiguity, and the construction of society

Defining the methodological framework through the perspectives of Michel Foucault and Ernesto Laclau, each chapter examines the ways in which theories of education contribute to the creation of social realities and identities. Such issues as the construction of visibility and invisibility of power, the tropes of temporality, or the use of postulational language where theorists say what ‘should’ be done in and by education, are some of the threads that weave through particular theories – from Rousseau to the discourse of education in the knowledge-based society – analysed as ontological rhetorics constitutive of political identities.

This book suggests a direction for a more conscious way of dealing with the political in education. As such, it will appeal to researchers, academics and postgraduate students in the fields of educational research, philosophy of education, curriculum studies, social and political theory, and theory of education.

Acknowledgements  1. Theory, (In)visibility, and Totality: Theories of education as discourses. By way of introduction  2. Rousseau: Education, society, and the nation. "I have decided to be what you made me"  3. Herbart: Discipline, mechanics, and "the fluid element"  4. Education and the Apparent Society  5. Knowledge, education, and ignorance 6. Rhetoric, The Political, and Education in light of Laclau’s theory  7. Theory, Identity, and Rhetorics: Summary and discussion Index

Tomasz Szkudlarek is Head of the Department of Philosophy of Education and Cultural Studies at the Institute of Education, University of Gdańsk, Poland.

‘What does educational theory do? This bold and original text positions educational theory as producer of social realities and political ideas.’
Claudia Ruitenberg, Associate Professor, Philosophy of Education, University of British Columbia, Canada

‘Educational theory is seldom treated with more important than it is in this book. Instead of trying to construct yet another educational theory to change, understand or explain the role of education in social contexts, Tomasz Szkudlarek starts from educational theory itself as a porous, vibrating field of energy inherently producing social reality. Instead of social reality establishing the conditions for educational thinking, Szkudlarek stresses how educational theory is a creation of certain visibilities that organize the social world and shape political hegemonies. As such this book is both innovative and provocative in its conceptualisation of the relationship between education, theory and politics and in its capacity to visualise how active social forces constitute what we consider to be ‘real’.’
Carl Anders Säfström, Professor of Education, Södertörn University, Sweden

‘Tomasz Szkudlarek succeeds superbly in pointing to the constitutive role of education in the construction of the political and in showing why Ernesto Laclau’s political theory needs pedagogical supplementation. And while he makes very clear how thinking pedagogically is essentially in need of postulational rhetoric, i.e. in need of using ‘should’s and ‘we’s, he at once, brilliantly, makes us become very vigilant about their use. This is a great contribution to educational theory, including truly original readings of the classics Rousseau and Herbart.’
Jan Masschelein, head of the Laboratory for Education and Society, and of the research group Education, Culture and Society, KU Leuven, Belgium

‘In this admirably clear, stimulating and path-breaking book Tomasz Szkudlarek politicizes educational theory as a specific genre of public discourse. Through a close engagement with founding figures of educational thought as diverse as Rousseau and Herbart, the author offers valuable explorations of how educational theories are implicated in politics by means of their role in the constitution of social ontology. To this end, Szkudlarek relies on a broad range of important thinkers (from Derrida and Foucault down to Rancière and Laclau) while supplementing their analyses with conceptions that do justice to objections raised by critics. Altogether this important new work brings some much-needed fresh insight to bear on political educational issues of invisible modern power relations and will be welcomed by readers in search of original perspectives on time-honoured tensions within educational and political theory.’
Marianna Papastephanou, Professor, Department of Education, University of Cyprus, Cyprus