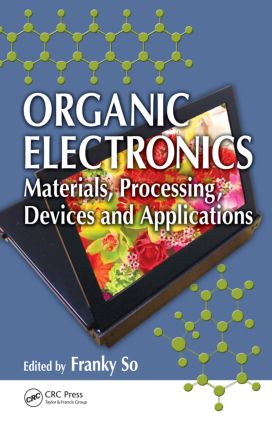 Edited by Franky So

In the near future, organic semiconductors may be used in a variety of products, including flat-screen TVs, e-book readers, and third-generation organic photovoltaics applications, to name just a few. While organic electronics has received increased attention in scientific journals, those working in this burgeoning field require more in-depth coverage of the subject.

Considering the rapid development in this field, Organic Electronics: Materials, Processing, Devices and Applications is a long-overdue assessment of state-of-the-art technology in organic electronics. This valuable reference harnesses the insight of various experts in the field, who contribute entire chapters on their area of specialty, covering chemistry and materials, fundamental physics, device processing, fabrication, and applications.

With its detailed discussion of the latest developments in the field of organic semiconductor materials and devices, this versatile book is ideally suited as a reference tool for scientists, engineers, and researchers or as an overview for those new to the field. In either capacity, its broad range of material will serve as a base for the further development of new sciences and technologies in this area.

Part I: Materials and Processing

The Role of Homolytic Reactions in the Intrinsic Degradation of OLEDs, D.Y. Kondakov

Franky So received his BA in physics from Hamilton College, his MS in materials science from the Massachusetts Institute of Technology, and his Ph.D in electrical engineering from the University of Southern California. After his graduation in 1991, he worked as a research scientist at the Hoechst Celanese Research Division studying high-speed polymer electro-optical modulators and organic light-emitting diodes (OLEDs). In 1993, he joined the Motorola Phoenix Corporate Laboratories working on OLEDs for flat-panel displays. He later became the program manager responsible for the development of OLED technology. During his tenure at Motorola, he received the Distinguished Innovator Award and the Master Innovator Award. In 2001, So joined OSRAM Opto-Semiconductors and became the head of materials and devices research. He was responsible for managing the OLED R&D activities for flat-panel displays as well as solid state lighting. In the summer of 2005, he joined the faculty in the Department of Materials Science and Engineering at the University of Florida. He currently works as an associate professor in the department. His research interests include electronic properties of organic semiconductor thin films, charge transport properties, device physics, organic-based light-emitting devices, organic photovoltaics, and organic sensors. Dr. So is currently an associate editor of the IEEE Journal of Display Technology and the journal Materials Science and Engineering Reports. Dr. So has more than 70 publications, holds more than 60 patents and is a Fellow of SPIE.