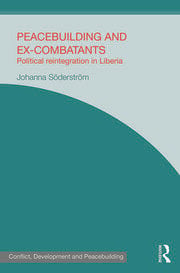 The book examines how ex-combatants in post-war and peacebuilding settings engage in politics, as seen in the case of Liberia.

The political mobilization of former combatants after war is often perceived as a threat, ultimately undermining the security and stability of the state. This book questions this simplified view and argues that understanding the political voice of former combatants is imperative. Their post-war role is not black and white; they are not just bad or good citizens, but rather engage in multiple political roles: spoilers, victims, disengaged, beneficiaries, as well as motivated and active citizens.

By looking at the political attitudes and values of former combatants, and their understanding of how politics functions, the book sheds new light on the political reintegration of ex-combatants. It argues that political reintegration needs to be given serious attention at the micro-level, but also needs to be scrutinized in two ways: first, through the level of political involvement, which reflects the extent and width of the ex-combatants’ voice. Second, in order to make sense of political reintegration, we also need to uncover what values and norms inform their political involvement. The content of their political voice is captured through a comparison with democratic ideals. Based on interviews with over 100 Liberian ex-combatants, the book highlights that their relationship with politics overall should be characterized as an expression of a 'politics of affection'.

This book will be of much interest to students of peacebuilding, African politics, democratization, political sociology, conflict resolution and IR/Security Studies in general.

1. Political Reintegration After War 2. The Case and Methodology 3. Political Involvement 4. Expressed Antagonism 5. Tolerance of Dissent 6. Inclusion in the Political Community 7. Understanding and Explaining the Politics of Ex-Combatants

Johanna Söderström is a postdoctoral researcher at the Department of Government, Uppsala University, Sweden and has a PhD in Political Science.

'One of the great challenges of peacebuilding is to encourage ex-combatants to demobilize and engage constructively in civilian politics. Johanna Söderström’s book provides an empirically rich and penetrating investigation of these essential issues and represents an important addition to our understanding of politics after civil war. Embedding her argument at the nexus of the literature on democratization and conflict resolution and at the micro level of analysis, she traces how political reintegration of ex-combatants will shape both the scope and content of their participation in post-conflict politics.'-- Terrence Lyons, George Mason University, USA

'The political mobilization of former combatants is often perceived as a threat, ultimately undermining the security and stability of the state. Their post-war role is complex and should be considered beyond a mere binary of bad or good citizenship. There is a huge need to recognize former combatants’ engagement in multiple political roles: spoilers, victims, disengaged, beneficiaries, as well as motivated and active citizens. Söderström has provided a valuable service in addressing these issues in her timely and path-breaking study in the context of Liberia and practitioners and scholars alike will find this book with keen practical and conceptual insights into the challenges of political reintegration of former combatants.' -- Alpaslan Özerdem, Coventry University, UK

'Rebel soldiering is partially a political activity. However in the aftermath of civil wars ex-combatants are often treated as non-political individuals. Indeed the international community entices rebel movements to create political parties to cater for the political/military elite of these movements. Despite commonplace failure and political marginality of such parties most research on political reintegration of ex-combatants limit their analysis to this. But in this book Söderström takes us further. By focusing on political choices of individual ex-combatants rather than the imagined collectivity of larger movements she opens up an important new field of research. Furthermore, research focus on ex-combatants post-war political participation has been limited to direct political party activities but in this book Söderström looks at all forms of political activities. This is laudable and the book ought to be a mandatory read to scholars interested in post-war politics in general and specifically for us with a Liberia interest.' -- Mats Utas, The Nordic Africa Institute, Sweden

'Söderström's work moves beyond familiar discussions of patrimonialism and threat to situate Liberian ex-combatants as moral actors and thoughtful decision makers. Arguing that former fighters see their options for participation within a framework of a politics of affection, she uses ethnographically rich interview data as well as Afrobarometer statistics to expand our understanding of post-conflict reintegration, democratization, and political voice. This is a major addition to the literature on Liberia and peacemaking in general.' -- Mary Moran, Colgate University, USA

'Traditionally, survey research has been by far the most common method for studying political participation. To study the challenging situation of post-war combatants in Liberia, Söderström moves in a different direction by using a series of focus groups to investigate their views about political participation after a decades long civil war. By summarizing 18 groups with 101 participants, this qualitative data produces insights into the views of non-elite fighters on such topics as voting, public protest, and joining larger political movements. Overall, Söderström creates an unusual opportunity to hear the voices of former combatants as they face the realities of reintegration.' -- David L. Morgan, Portland State University, USA