Penal Culture and Hyperincarceration
The Revival of the Prison 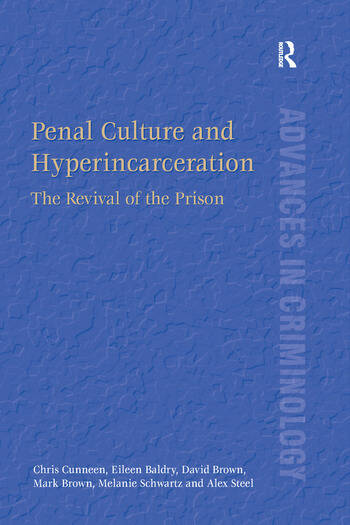 Penal Culture and Hyperincarceration: The Revival of the Prison

What are the various forces influencing the role of the prison in late modern societies? What changes have there been in penality and use of the prison over the past 40 years that have led to the re-valorization of the prison? Using penal culture as a conceptual and theoretical vehicle, and Australia as a case study, this book analyses international developments in penality and imprisonment. Authored by some of Australia’s leading penal theorists, the book examines the historical and contemporary influences on the use of the prison, with analyses of colonialism, post colonialism, race, and what they term the ’penal/colonial complex,’ in the construction of imprisonment rates and on the development of the phenomenon of hyperincarceration. The authors develop penal culture as an explanatory framework for continuity, change and difference in prisons and the nature of contested penal expansionism. The influence of transformative concepts such as ’risk management’, ’the therapeutic prison’, and ’preventative detention’ are explored as aspects of penal culture. Processes of normalization, transmission and reproduction of penal culture are seen throughout the social realm. Comparative, contemporary and historical in its approach, the book provides a new analysis of penality in the 21st century.

Professor Chris Cunneen is a conjoint professor of criminology in the Faculty of Law of the University of New South Wales. He held the NewSouth Global Chair in Criminology at UNSW from 2006 to 2010. Until 2005, Professor Cunneen was the Director for the Institute of Criminology at the University of Sydney, a position held since 1995. He has been teaching Criminology at the University of Sydney Law School since 1990. Previously he held research positions with the Indigenous Law Centre at UNSW and the NSW Bureau of Crime Statistics and Research. Professor Cunneen is a member of the Editorial Boards of the Australian and New Zealand Journal of Criminology (since 2010), Australian Indigenous Law Reporter (since 1997), Current Issues in Criminal Justice (since 1991) and Youth Justice (since 2005). He is also a Series Editor of the Institute of Criminology Monograph Series. He was the Chairperson of the Juvenile Justice Advisory Council which advised the Minister on juvenile justice matters from 2002-2008. He was a member of the Attorney-Generals Taskforce on Child Sexual Assault in Aboriginal Communities. Professor Cunneen has published widely in the area of juvenile justice, policing, restorative justice and Indigenous issues including reports for the Federal Race Discrimination Commissioner and a number of books on issues such as juvenile justice; Indigenous legal issues; hate crime, and policing. He has also contributed articles to many journals.

Emeritus Professor David Brown taught Criminal Law, Advanced Criminal Law, Criminal Justice, Crime Prevention, Community Corrections and Penology courses at the University of NSW in Sydney from 1974 to 2008. He is a co-author of the major and innovative Criminal Laws (1990), (2nd edn 1996) and (3rd edn 2001) (4th edn 2006) (5th edn 2011) which has become the leading student teaching text in criminal law in universities in NSW. He is very widely published across the broad areas of criminal law, criminal justice, criminology and penology, both in Australia and internationally. He has co-authored or co-edited 10 books; published 33 chapters in books, and over 100 articles in journals and in conference proceedings published; given 120 conference papers or public addresses all over the world; and is a regular media commentator on criminal justice issues.

Dr Mark Brown is a Senior Lecturer in the School of Law, Sheffield University, UK, and an Honorary Senior Fellow in the School of Social and Political Sciences at the University of Melbourne, Australia. Previously based in Geneva, he worked as a law and justice consultant focused on actors in the international sphere. His earlier academic career was spent in Australia where he was in the criminology program at the University of Melbourne. He has also been a visiting professor at the Institute for Criminology and Criminal Law at the University of Lausanne and at Delhi University Law School. He is co-author of Penal Culture and Hyperincarceration (Routledge 2013) and author of Penal Power and Colonial Rule (Routledge 2014) and the forthcoming Remaking Criminology.

Melanie Schwartz has been teaching criminal law in the Faculty of Law, UNSW, since 2006. She also teaches in the Indigenous programs in the Faculty including the pre-law program and the winter school. She co-convenes the criminal justice stream in the Diploma of Humanities.

Alex Steel is the Associate Dean (Education) and an Associate Professor in the Law School. He has published widely on theft, fraud and dishonesty law and theory. He is an author of the highly regarded Criminal Laws: Materials and Commentary on the Criminal Law and Procedure of NSW (4th ed). Alex has also produced detailed law reform reports for Government and makes regular submissions to law reform bodies. Alex is a member of the Criminal Law Committee of the NSW Bar Association and an expert advisor to the NSW Law Reform Commission. He was previously a Consultant to the NSW Attorney General's Department, Criminal Law Review Division.

’... I admire, and would recommend, the book as a model of academic writing, exegesis, explanation and argument. The authors are clearly very much at home with the vast array of empirical materials and theoretical perspectives which they describe, explain and employ with ease and elegance of expression...It is that clever and seamless combination of structure and strategy which unifies the six authors’ contributions into one consistent and coherent authorial voice. And, also arguably, it is that authoritative but multiply-nuanced voice that endows the book with its discursive power.’ British Journal of Criminology ’The cutting edge theorizations and focus on colonialism and racism by Australia’s leading penal theorists make this book an outstanding and original exercise in comparative and historical criminology.’ Pat Carlen, University of Kent, UK ’This is a compelling account of contemporary penal development in Australia and its underlying causes. In what is a rarity, the analysis is based on research in each state. It will be of great interest both in Australia and beyond.’ John Pratt, Victoria University of Wellington, New Zealand ’The revalorization of imprisonment is a development that has shocked and dismayed experts around the world. This remarkable book examines the prison’s changing meanings, traces its shifting place in contemporary culture, and offers penetrating insights into the social and political processes that explain the surprising resurgence of this 19th century institution in the 21st century.’ David Garland, New York University, USA and author of The Culture of Control and Peculiar Institution