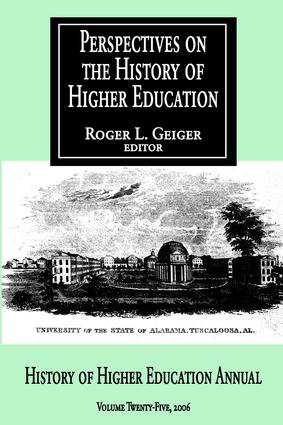 Perspectives on the History of Higher Education

Volume Twenty-Five of Perspectives on the History of Higher Education, the silver anniversary edition, offers three fresh contributions to the understanding of American higher education in the nineteenth century and three historical perspectives on topics of contemporary concern.

The divergent paths of antebellum colleges in the North and South have long been recognized. Stephen Tomlinson and Kevin Windham discuss Alva Woods, who moved from Calvinist New England to preside over the new University of Alabama. Woods personified the commitment to evangelical Protestantism and rigid student discipline that prevailed in northern colleges of that era, but in Tuscaloosa confronted the sons of planters, raised to respect mainly independence, power, and the Southern code of honor. Adam Nelson considers geology, a crucially important science in early America that existed on the periphery of higher education but eventually exerted pressure for intellectual modernization. He portrays the small community of scientific pioneers who sought the latest scientific knowledge from Europe, surveyed the mineral wealth of American states, and advocated for science in the college curriculum.

Beginning in the 1930s, the National Research Council waged an organized campaign to encourage academic patenting and centralize it within one organization. Jane Robbins explains the crosscurrents of interests that plagued and eventually scuttled that effort, but that set the stage for the contemporary practice of university patenting. Robert Hampel examines how, for more than four decades, students at Yale University took a major responsibility for learning into their own hands by publishing a Critique of courses. He analyzes these documents to determine if their aims were to identify easy or challenging offerings, and finds that this effort produced highly responsible articles. A review essay by Doris Malkmus sheds new light on the experience of co-eds in post-bellum universities and normal schools, while one by Nancy Diamond discusses the university presidency, and deftly shows that examining presidential lives can offer telling perspective on the evolution of the university.