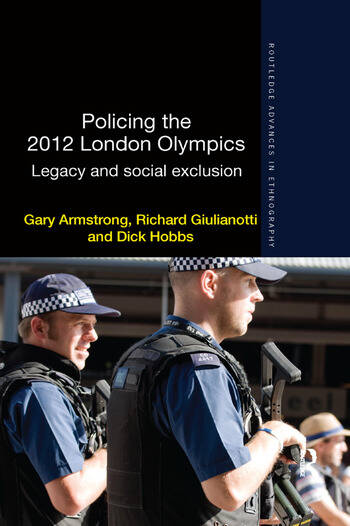 The summer Olympic Games are renowned for producing the world’s biggest single-city cultural event. While the Olympics and other sport mega-events have received growing levels of academic investigation from a variety of disciplinary approaches, relatively little is known about how such occasions are experienced directly by local host communities and publics.

This ethnography examines the everyday policing of the London Borough of Newham in relation to the London 2012 Olympics. It explains how police defined, monitored, prioritized, contained and investigated ‘Olympic-related’ crime, and how ‘Olympic-related’ policing connected to the policing of Newham. The authors examine how the threat of terrorism impacted on the everyday policing of the 2012 Olympics, as well as the exaggeration of other threats to the Games – such as youth gangs – for political reasons. The book also explores local resistance to Olympic policing, and the legacy of the Games with regard to policing, local housing, demographics and social exclusion.

Discussing the lessons that can be learned for the future staging of sporting mega-events, this book will appeal to scholars and students with interests in sport, policing, crime and criminology, mega-events, event management, urban studies, global studies and sociology.

2. Newham: A Brief History of ‘the Gash’

3. Youth as an Olympic Threat

6. Policing the Boundaries: The Heart of the Olympics in Newham

Gary Armstrong is Reader in the Department of Sociology at Brunel University, London, UK.

is Professor of Sociology at Loughborough University, and also Professor II at Telemark University College, Norway.

“This amazing book goes beyond the Olympics and gives both a state-of-the-art commentary on post-industrial London and a glimpse into the dark side of Olympic-driven gentrification. The local police were as helpless in the path of the Olympic machine as the local politicians. Manipulated by the mayor of London and a predatory Olympic movement, residents of the London Borough of Newham have not benefited from the Games held in their backyard, so this excellent study should be examined by anyone considering holding a major sporting event in their city. An example of urban ethnography at its best, this is an outstanding read.”

"Drawing upon a detailed knowledge of London’s urban history—which they combine with remarkable access to key security officials—Hobbs and Armstrong have written a book that will be a ‘must read’ for scholars of policing, mega-events, and anyone interested in contemporary trends in security."

"Security is a top priority for organisers of the modern Olympics. Policing the London 2012 Olympics explores what this requirement really means, particularly for communities living closest to the Games’ venues. Meticulously researched and engagingly written, it will appeal not just to those interested in understanding how the Games are staged but also in the challenges that hosting such megaevents pose for civil society."

"In 2012 the Olympics in London took place in a very local place, rich in history and legacies of policing styles that were formed in that history. Hobbs and Armstrong provide a rich description of the complexities of policing with the experience of the mundane in the midst of global sporting excitement. The insight into policing cultures, the policing of priorities and subsequent juggling of public and mandates sits throughout this book."

"A masterful and unique of its kind empirical work that leads to much needed insights into the impact of a sport mega-event both on the everyday policing and the manifold reshaping of the host city. In unraveling the complex way local, national and global risk assessments interact with political interests at stake, social challenges and the management of police resources, this brilliant study sheds light on the dynamics of the usually hidden rationales, mechanisms and processes that lie beneath the work of security-involved actors, agencies and institutions before, during and after the London Olympics."

“The main highlights of the book are: first, an over-the-shoulder view of policing the London Olympics, which is priceless; a blow-by-blow account of the policing of a world event in a troubled time of worries about possible terrorist attacks; and finally, the way the authors theorise the role of the police in terms of accountability, practice and culture. Indeed, the way the police ‘tolerate’ those they would once have regarded as ‘police property’ and take a philosophical stance regarding citizens’ rights makes this text a modern day classic. Aside from the rich illustrative material on Newham and the Games, this ethnography offers an unrepeatable ‘backroom’ view of current police practices, attitudes and culture in a way that any other form of research could not provide. ‘Being there’, once again proves to be the methodological gold standard.”  Louise Westmarland (2017): Policing the 2012 London Olympics: legacy and social exclusion, Policing and Society