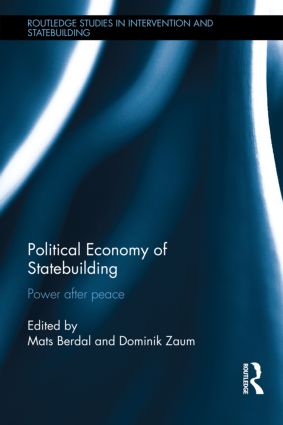 This volume examines and evaluates the impact of international statebuilding interventions on the political economy of conflict-affected countries over the past 20 years. It focuses on countries that are emerging, or have recently emerged, from periods of war and protracted conflict. The interventions covered fall into three broad categories:

This book will be of interest to students of statebuilding, humanitarian intervention, post-conflict reconstruction, political economy, international organisations and IR/Security Studies in general.

"This is an important book because it focuses on the most critical and, sadly, often-neglected aspect of state building -- the political dimension. The high quality essays in this volume not only illuminate state-building cases and practices, they also make a compelling case that shaping political economies and fostering political settlements conducive to reform are foundational and essential to success." - Brig. H.R. McMaster, US Army.

"This book, which contains a magisterial introduction by Mats Berdal and Dominik Zaum, brings together some of the top thinkers in the world of peacebuilding. It takes the commonly expressed idea that 'development' is a necessary route to peacebuilding, and shows how neo-liberal interpretations of 'development' have often promoted instability, not least by promoting large-scale unemployment."- David Keen, LSE, UK

"Focusing on the interactions between external 'statebuilders' and local power brokers - and how these processes shape post-war developments - Mats Berdal and Dominik Zaum have produced an impressive collection of thematic and country cases that significantly enriches our understanding of the consequences of statebuilding interventions."- Astri Suhrke, Christian Michelsen Institute, Norway

'With a particular focus on economics, the book is a well-written, analytically impeccable and insightful account of the limits of state-building by some of the best scholars in the field.' - Erik Jones, Survival Journal June 2013

Mats Berdal is Professor of Security and Development in the Department of War Studies at King's College London. He is Visiting Professor at the Norwegian Defence University College, and author/editor of several books.

Dominik Zaum is a Reader in International Relations at the University of Reading, and a Senior Research Fellow at the UK Department for International Development (DFID). He is author of several books on state- and peacebuilding.