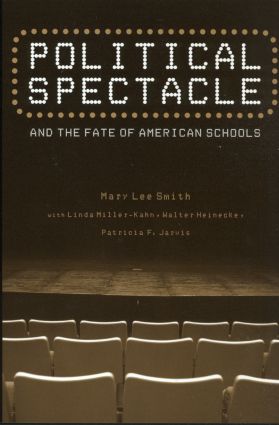 Political Spectacle and the Fate of American Schools

The authors argue that the most influential and well-known educational policy programs in the past 30 years are not based on democratic consensus, but are instead formulated by the political community as symbolic efforts meant to generate personal partisan gain.

"Smith's starting premise, then, is as much an indictment of American democracy as of educational policy…The details in the case studies represent the strength of the book. Considered together, they show, in often compelling detail, how narrow self-interests propel political actors, how misleading rhetoric hides these interests, how democratic ideals are severely compromised, and how policy research is highly politicized. If anyone needs reminding that the real world departs from the idealized model of rational, deliberative decision-making, this volume provides the necessary reminder." -- Teachers College Record

"With all the hype about the kinds of recent policies that promise to 'reform' the ways in which schools are controlled and financed, there has been almost no serious discussion of the actual politics of the policies themselves and of their political effect. This is where Political Spectacle enters. It provides a thorough, critical analysis of what the politics behind these reforms actually are and who the winners and losers in this process will be. I can think of no one better to write such a book than Mary Lee Smith and her colleagues." -- Michael W. Apple, University of Wisconsin, Madison

"No one I know writes more convincingly about the purely symbolic and broadly harmful educational policies that are foisted on the American people by irresponsible political leaders. I hope this book sparks outrage among all those who still love America's public schools." -- David C. Berliner, Arizona State University

"This is the most insightful book about educational policy that I have read for quite a while." -- Ernest R. House, University of Colorado, Boulder

Mary Lee Smith is Professor in the Department of Education Leadership and Policy Studies at Arizona State University and the Director of Southwest Education Policy Studies in Phoenix, Arizona. She has spoken at local schools and educational agencies nationwide on the topics of grade retention and mandated assessment.