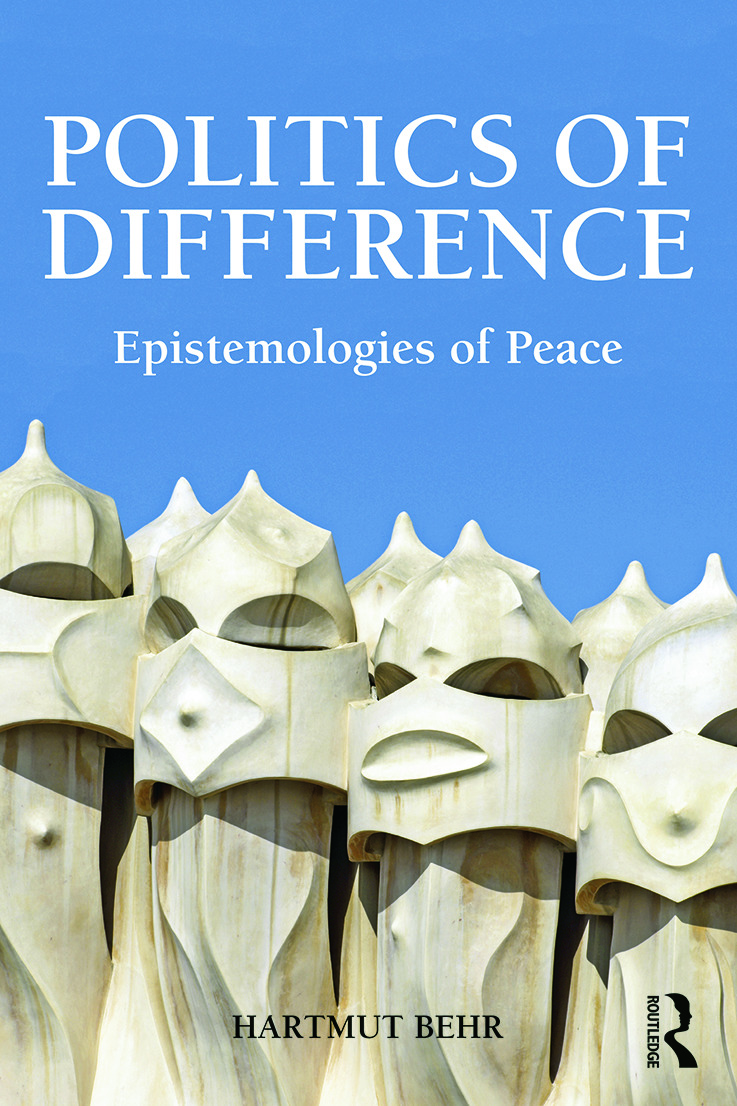 This book develops a notion of differences and 'otherness' beyond hegemonic and hierarchical thinking as represented by the legacies of Western philosophical and political thought.

In doing so, it relates to the phenomenological discourse of the twentieth century, especially to Georg Simmel, Alfred Schütz, Emmanual Lévinas, and Jacques Derrida, and drafts our understanding of difference as a genuine human experience of a social and political world that is in motion and transformative, rather than static and predictable. On this basis of temporalized ontology and its normative consequences, differences are drafted as a positive social and political force and as powerful capacities of transformation and change. In practical terms, this understanding is most important for our theorizing and acting upon peace, peace-building, and conflict solution. Differences now appear not as obstacle to peace and reconciliation, but as lively and constructive articulations of 'otherness' and as a positive power of transformation, emancipation, and change.

This book will be of interest to students of international relations, philosophy and political theory.

"Difference has become a significant concern of the study of international politics and also in peace and conflict studies. Yet, approaches to understanding or incorporating issues of difference into the analysis of international order have often tended to come to rest on essentialising notions of ethnicity or other forms of identity, which also are relegated to a state of lesser importance than westernised notions of secular citizenship, cosmopolitan toleration, and free-flowing capital. This important book engages with the difficult and necessary task of envisioning peace-with-difference in international politics. Without advances in this area, as Professor Behr outlines, difference is destined to undermine order when instead it might be constitutive of peace."

"Hartmut Behr makes a significant contribution to our understanding of the fundamental problems centering around our conventional concept of peace. With the help of phenomenological, anti-essentialist thinkers, he reveals that the concept of peace, as deployed in the Western tradition of political and philosophical thought as well as in international politics, is a hegemonic and imperial concept that suppresses and assimilates difference, thus effacing otherness for the sake of the self. He eloquently invites us on a thrilling but serious journey towards reconceptualizing a non-hegemonic peace that is hospitable to difference."

"Philosophically grounded, Politics of Difference not only produces one of the most compelling critiques of 'imperial peace' and its genealogies, but offers with sustained intellectual vigour an original discourse on the ontology of our times. It is truly a tour de force."

Preface; Acknowledgements; Glossary; Introduction; 1 In Defence of Ontology, 1.1 Introduction, 1.2 From relativism to relationism: on reading and normativity, 1.3 Ontology is not (necessarily) essentialism: on temporality; 2 The Problem of "Otherness" and Modes of Temporality, 2.1 Introduction, 2.2 Western ontologies and the construction of "otherness", 2.3 Searching for thinking difference beyond; 3 Phenomenologies of "Otherness", 3.1 Introduction, 3.2 Being-in-time, transformativity, and sociability; 3.3 ‘Crisis’/’trauma’, the question of beginning, and the permanence of critical exegesis; 4 From E Pluribus unum to Fatemini Pluribus Pluribum, 4.1 Introduction, 4.2 Non-silence and the embrace of differences, 4.3 Western narratives of ‘peace’: a critique, 4.4 Peace as living towards differences; Conclusions: Conditions of the Possibility of Peace; Bibliography; Index

Hartmut Behr is Professor of International Politics at Newcastle University (UK) and specializes in political theory, sociology of knowledge of the discipline of IR, and critical European studies. He is the author of A History of International Political Theory (2010), Entterritoriale Politik (2004), and Einwanderungspolitik im Nationalstaat (1998).