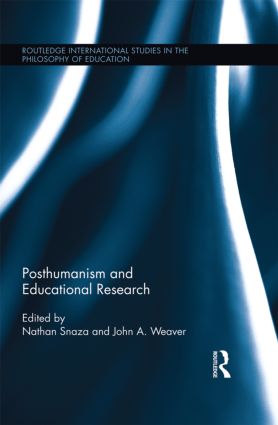 Focusing on the interdependence between human, animal, and machine, posthumanism redefines the meaning of the human being previously assumed in knowledge production. This movement challenges some of the most foundational concepts in educational theory and has implications within educational research, curriculum design and pedagogical interactions. In this volume, a group of international contributors use posthumanist theory to present new modes of institutional collaboration and pedagogical practice. They position posthumanism as a comprehensive theoretical project with connections to philosophy, animal studies, environmentalism, feminism, biology, queer theory and cognition. Researchers and scholars in curriculum studies and philosophy of education will benefit from the new research agendas presented by posthumanism.

" What is evident by the end of the book is that posthumanism is a philosophical and interllectual form of inquiry - and Weaver challenges the broad field of education to release itself not only from the constraining forces of humanism, but also what Snaza and Weaver called in their introduction methodocentrism. Weaver is boldly stating that education and educational inquiry needs to become more interllectual; posthumanist philosophy and inquiry is one rhizomatic pathway that may unleash possibilities long since forgotten, reminding us of the interconnected nature of humans, animals, objects, and forces within educational inquiry."

"In summary, this volume is a valuable contribution both to furthering the discussion on how post-humanism can help change educational theory and practice."

Foreword by Dennis Carlson Introduction: Education and the Posthumanist Turn Nathan Snaza and John Weaver Part I: Humanism, Posthumanism, and Educational Research 1. Toward a Genealogy of Educational Humanism Nathan Snaza 2. Researching the Posthuman Paradigm: The "Subject" as Curricular Lens Brad Petitfils 3. Posthumanist Education and Animal Interiority Marla Morris 4. Educational Policy-Making for Social Change: A Post-Humanist Intervention Helena Pedersen 5. "Approximate-Rigorous-Abstractions": Propositions of Activation for Posthumanist Research Stephanie Springgay Part II: Attuning to the More Than Human Complexities of the Classroom6. Ecologies of Praxis: Teaching and Learning Against the Obvious Nikki Rotas 7. Losing Animals: Ethics and Care in a Pedagogy of Recovery Alyce Miller Part III: Ecological Aesthetics8. Affirmations and Limitations of Rancière’s Aesthetics: Questions for Art and its Education in the Anthropocene Jan Jagodzinski 9. Dark Posthumanism, Unthinking Education, and Ecology at the End of the Anthropocene Jason Wallin Part IV: What Posthumanist Education Will Have Been10. Undoing Anthropocentism in Educational Inquiry: A Phildickian Space Odyssey? Noel Gough 11. Resisting Becoming a Glomus Body Within Posthuman Theorizing: Mondialisation and Embodied Agency in Educational Research Annette Gough 12. To What Future Do the Posthuman and Posthumanism (Re)turn Us; Meanwhile, How Do I Tame the Lingering Effects of Humanism? John Weaver

Nathan Snaza is Director of the Bridge to Success Program and member of the English Department at the University of Richmond, USA. His writings have appeared in journals such as Journal of Curriculum and Pedagogy, Angelaki, Educational Researcher and Journal of Critical Animal Studies.

John A. Weaver is Professor of Curriculum Studies at Georgia Southern University, USA. He is the author of Educating the Posthuman (2010), Popular Culture: A Primer (2004/8), Rethinking Academic Politics in Germany and The United States (2000) and editor of four other books including (Post) Modern Science (Education) (2001). He is the author of 30 journal articles and book chapters.

Routledge International Studies in the Philosophy of Education