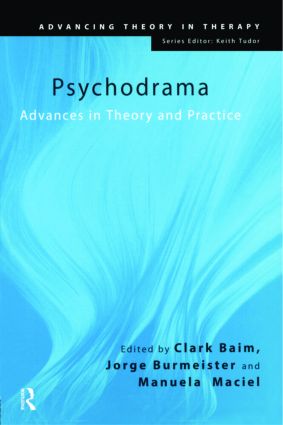 Psychodrama: Advances in Theory and Practice provides a comprehensive overview of developments in the theory and practice of psychodrama, integrating different psychodramatic schools of thought.

Psychodrama is one of the pioneering approaches of psychotherapy and is practised by thousands of practitioners and in most countries of the world. The editors of this volume bring together contributions from Europe, South America, Australia, Israel and the USA to explain and explore recent innovations. They look at how psychodrama has contributed to the development of psychotherapy, introducing concepts that have had a profound influence on other therapies. These include concepts such as role theory, the encounter, the co-unconscious, the social atom, sociometry, action research, group psychotherapy, the cycle of spontaneity and creativity, role play and many related concepts and techniques.

This book will be of great interest to all students, practitioners and trainers in the field of psychodrama. It will also appeal to professionals and students in the related fields of psychotherapy, counselling, psychology and psychiatry.

"At last, a book series that will help to make the ideal of effective continuing professional development in the fields of psychotherapy and counselling more of a reality. Without being partisan or requiring an unrealistically high level of existing knowledge, the books offer a unique opportunity for experienced practitioners and advanced students to encounter the cutting edge of theory in their particular theoretical model." - Andrew Samuels, Professor of Analytical Psychology, University of Essex, UK

"This book represents the first global project in psychodramatic literature in the 21st century. The outstanding benefits of psychodrama, sociometry and group psychotherapy have spread across the globe. All of the human sciences are increasingly benefiting from approaches that have grown out of the introduction of the psychodramatic stage and its related healing techniques… What joy to give this miraculous product of human creativity into the reader's care." - Grete A. Leutz, Founder of the Moreno Institute for Psychodrama, Sociometry and Group Psychotherapy, Ãœberlingen, Germany; Fellow of the International Association of Group Psychotherapy

"This volume pays homage to the genius of J. L. Moreno, who has inspired us all. The element that is basic to all of the instruments he gave us is that of The Encounter: eye-to-eye, face to face, nothing standing between us. His activities underscore the need for all of us to continue to join him in his endeavor to enable The Encounter. May this book be part of that endeavor." - Zerka T. Moreno, co-creator of psychodrama, sociometry and group psychotherapy

"This outstanding collection of 20 chapters by 25 authors from 12 countries contains a group of cohesive explanations for why psychodrama works, introduces a smorgasbord of creative advances in the field, and overviews the treatment efficacy of psychodrama psychotherapy… This book challenges us to continue to strive to articulate creation theory as informed by scientific discoveries and mathmatical dynamics and apply it to psychotherapy." - Linnea Carlson-Sabelli, APA Journal, PsycCritiques 53(19) May 2008

Clark Baim is a psychodrama trainer based in the UK, specializing in work with offenders. He has written and co-edited a number of books, journal articles and chapters. He was the founding director of Geese Theatre UK, a company focusing on rehabilitative drama with offenders.

Jorge Burmeister became the President Elect of the International Association of Group Psychotherapy in 2006. He is a founding member of the Federation of European and Mediterranean Psychodrama Training Organizations and has worked as a psychodrama trainer and supervisor in several European countries.

Manuela Maciel is currently chairperson of the International Psychodrama Section of the IAGP (International Association of Group Psychotherapy). She has been a Psychodrama Practitioner for 20 years and is a psychodrama trainer and supervisor in her native Portugal

Most books covering individual therapeutic approaches are aimed at the trainee/student market.

This series, however, is concerned with advanced and advancing theory, offering the reader comparative and comparable coverage of a number of therapeutic approaches.

Aimed at professionals and postgraduates, Advancing Theory in Therapy will cover an impressive range of theories.

With full reference to case studies throughout, each book in the series will: